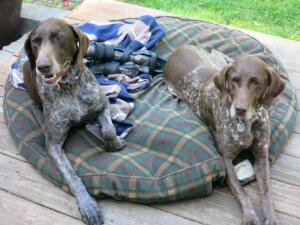 Whiskey, a German Shorthaired Pointer, was adopted from GSP Rescue New England in 2009 when he was a year and a half old. Whiskey joined Rosie, another GSP rescue; the two of them became inseparable, says their owner Adair Carty. Life hummed along until about three years ago when a friend of Adair’s, who was in veterinarian school, noticed that Whiskey appeared to be walking on the tips of his toes. Thus began a long journey, a story of love and compassion.

After trips to various vets, Adair found out that Whiskey had Achilles injuries. They tried custom orthotics for a few months, followed by experimental injections administered through a veterinary school, but there appeared to be no improvement. Whiskey was also getting physical therapy as well as laser therapy several times a week. Ultimately, surgery was done on Whiskey’s right leg.

When Whiskey returned from the hospital, he had pins in his leg requiring special care and restricted activity. Unfortunately, Whiskey got a serious infection in the post-op leg, which required dressing changes, antibiotics, and pain medications. The pins eventually came out, followed by more physical therapy. 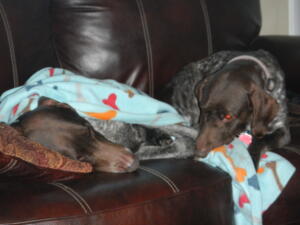 Sometime after, Adair was informed that Whiskey would need surgery on his left hind leg as well. The whole routine began again with surgery, pins, and dressings, followed by physical therapy and water therapy. Sadly, after several weeks in the post-op brace, the vet determined that the surgery was unsuccessful. 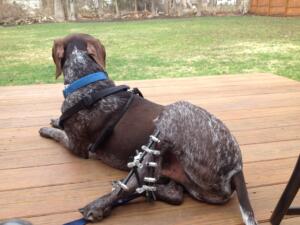 Adair didn’t want to put Whiskey through any more poking and prodding and decided to give him a few months to regain his strength and energy. Meanwhile, she investigated how to do something that would increase Whiskey’s quality of life and allow him to live with his disability in the best way possible.

Adair got Whiskey a new pair of braces which helped him significantly. But she wanted to do more; as much as the braces helped, he still wasn’t able to go for longer walks, nor was he able to go to the beach or on trail walks. That’s when Adair decided it was time to look into getting Whiskey a dog wheelchair. 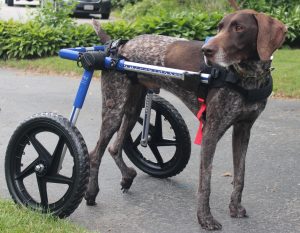 Whiskey is now in a Walkin’ Wheels wheelchair, and there is little that can stop his indomitable spirit from enjoying life to the fullest!

“Whiskey has been through so much, but he is still a super happy boy who loves to play and be with people. Sometimes he forgets that he’s handicapped, but that’s what I love so much about him. He never lets his legs stop him! Whiskey is an absolutely amazing boy!”

HandicappedPets.com thinks that Adair Carty is an absolutely amazing pet caregiver and thanks her for her compassionate pet care.

Compassionate Care for Pets with Disabilities

HandicappedPets.com also thanks Caitlin O’Neill, Miss Southern Rhode Island, for championing the cause of raising awareness about pets with disabilities and for her help in making this video of Whiskey’s story: 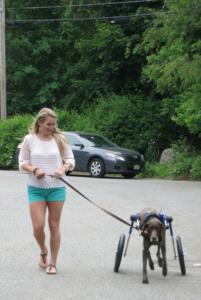 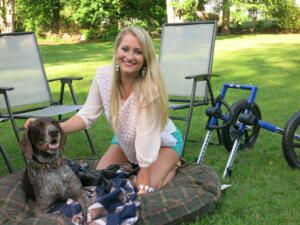 Did we answer all your questions on "German Shorthaired Pointer"?