Seizures are the most commonly reported canine neurological condition. Regardless of a dog’s age, seizures need to be taken seriously. Seizures in dogs are typically a symptom of another underlying health problem that requires treatment.

What is a Seizure?

When a dog has a seizure, they convulse, experience uncontrollable body movements, stiffness, and may experience different levels of consciousness. Seizures range greatly in severity and can present in many different ways. The most minor seizures can start and stop quickly, with mild symptoms that last a few seconds. However, the most severe episodes may include violent movement and go on for several minutes. Dogs that suffer from a chronic seizure disorder are diagnosed with epilepsy. 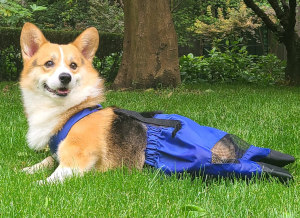 Causes of Seizures in Senior Dogs

Tumors located in a dog’s forebrain frequently trigger seizures in dogs. With sudden onset seizures, dogs over the age of six will be checked for a brain tumor through diagnostic testing.

Although the cause is unknown, idiopathic seizures are believed to be an inherited condition and the number one cause of canine epilepsy.

Seizures are common in dogs after suffering a traumatic head or brain injury. In a study shared by the AVMA, veterinarians discovered that dogs with head trauma are at a higher likelihood of seizures immediately following the trauma and early in the recovery process than other dogs.

A dog’s diet can trigger a seizure. These seizures are typically triggered to do a mineral or vitamin deficiency, but can also occur when a dog eats something unsafe, such as chocolate. Always speak to your veterinarian before changing a dog’s diet. Make a vet appointment and come prepared with your dog’s current dog food information.

How a dog’s seizures are treated will vary depending on what is causing the seizures, the type of seizure the dog is having, and their risk level for continued seizures.

Most epileptic dogs can live a full and active life with regular therapy and medication. However, a dog whose seizures are left untreated risks euthanasia, as its quality of life will be severely impacted. Expect your senior dog to require lifelong treatment for their seizure disorder. There is no cure for seizures in dogs. Seizures are typically a symptom of another medical condition that needs. Work with your veterinarian to create the best plan to give your senior dog the best possible outcome.

5 Reasons to Vaccinate Your Animal Companion

How to Use a Dog Wheelchair for Rehabilitation

Prioritizing Your Mental Health While Caring for a Dog with Disabilities