If you’re giving your beloved pooches some snuggles and you feel a lump or bump on their skin, chances are your mind will jump straight to the fear of cancer.

Thankfully, the chances of it being cancerous is unlikely, although you most certainly need to have it checked out to be sure.

Dog skin issues are common in aging dogs. As dogs age they develop skin conditions and bumps that they never had before. Most lumps found on dogs turn out to be fatty, benign (non-cancerous) tumors. That said, unless you are completely confident as to the nature of a lump or bump, get it seen to. If your dog appears to be in any pain or if the area is changing quickly, swelling, or reddening, or if there is any sign of an opening or pus, consult with a vet urgently.

Here is a brief guide to the 12 most common lumps and bumps in canines.

Just like us, dogs can develop harmless skin tags, particularly as they age. Skin tags are fibrous growths that usually protrude from the surface of the skin via a stalk of skin. In some cases a dog will only have one or two, but others may develop many of them over their legs, armpits, back, chest and face. Any breed can develop skin tags, but they are more common in larger breeds.

The most common types of lumps found on canines are lipomas. Lipomas are soft, fat cell tumors that usually grow very slowly and don’t tend to spread. It can take half a year or more before they change noticeably. A veterinarian will occasionally recommend that a lipoma be removed if it becomes too big or otherwise hinders the dog’s mobility (if it is sitting up in their armpit, for example).

Another harmless canine bump is a sebaceous cyst. These cysts are hard bumps that are caused by a blocked sebaceous gland. They are similar to a pimple – slightly swollen and containing a light, creamy matter. They often go away with treatment, but sometimes burst or need to be drained.

These tumors relate to the sebaceous glands that surround a dog’s anus. Most common in unneutered male dogs, but can also be seen in female dogs that have been spayed. Slow to grow, a perianal adenoma is rarely painful, but may become infected or ulcerated.

These ulcerated nodules are more common in younger dogs and usually found on their limbs. They present as red, button-like lumps and normally disappear quite quickly. It is still best to get them checked over, though, as they have a similar appearance to some cancerous tumors.

Otherwise known as urticaria, dogs can suffer with hives similarly to the way we do. They can develop as a rash either as round, red bumps, or raised, itchy bumps that can look round or oval. Hives are caused by a reaction to a plant, sting or other allergen. When mild, hives will often disappear on their own, but, if the reaction is more severe, a dose of antihistamine or steroid might be administered by your vet.

An abscess is an accumulation of pus creating a swollen lump under the skin and is caused by infection. Abscesses generally require drainage and flushing with an antibacterial agent – usually done under sedation. Sometimes a course of antibiotics will also be necessary.

Otherwise known as papillomas, warts are small skin growths that can appear quite suddenly on the skin, and are caused by a highly contagious virus called the papillomavirus. They are most common in younger and older dogs, as well as those that are immunocompromised. Best to get them biopsied, although vets can usually tell by their feathery appearance. They usually disappear within a few months with no treatment required.

The most common canine skin cancer is the Mast cell tumor (MCT). Most common in dogs over the age of eight, and from particular breeds, including Labrador retrievers, Boxers, Beagles, and Boston terriers. These tumors can have a very similar appearance to many others, so it’s essential to have them assessed by a vet. Once diagnosed as MCT, it’s vital to check for any spreading to other organs.

Unlike human melanomas, those in dogs are not caused by sunlight, they involve the cells that give their skin pigment, and are usually much less malignant. That said, they can still be malignant or benign. Canine melanomas look like dark lumps on the skin that slowly get bigger. More aggressive versions tend to grow on their legs and around their mouth. They must be removed by a vet, but can reoccur.

Usually developing deep under the skin’s surface or within the muscle, these groups of tumors appear as one firm lump and are not often painful. They commonly occur on the chest, legs, or abdominal wall and are more likely to develop in older breeds of advancing age.

Presenting as dry, crusty raised sores, these skin cell tumors appear on hairless and unpigmented areas like the lips, nose, eyelids and vulva, and are caused by excessive exposure to the sun.

Squamous cell carcinomas should be removed quickly, as they can cause significant pain and deformities, as well as posing the risk of spreading to other organs and lymph nodes, which is often fatal.

These are some of the most common causes of lumps and bumps to be found on or under a dog’s skin. While one can’t help but try to draw their own conclusions out of worry, it is vital that any unusual lump, bump or rash be checked out by a vet to be sure. Thankfully, cancerous skin tumors are rare, but it’s better to be safe than sorry, especially when it comes to avoiding spreading. 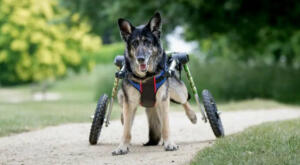 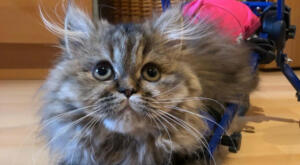 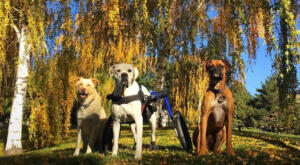 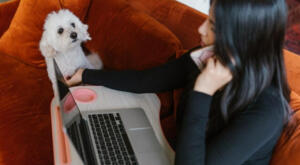 Balancing Work-From-Home with a Disabled Pet