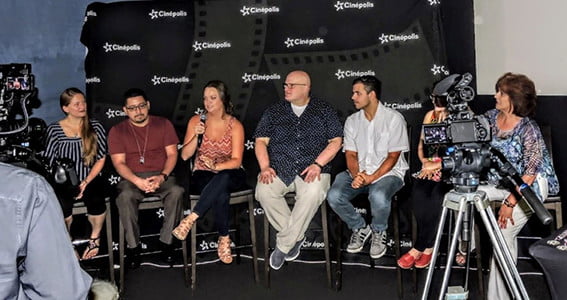 AMHERST, NH (July 17, 2018) – Walkin’ Pets by HandicappedPets.com won the Best Wild Card Film award for their music video TO THE PETS! in the 2018 Canine Film Festival held in Miami, Florida, on July 14. Mikayla Feehan, social media coordinator at Walkin’ Pets, wrote the song and directed the filming for the video. She participated in the Directors & Filmmakers panel presentation at the festival and accepted the award on behalf of Walkin’ Pets.

TO THE PETS! is a fun-filled video showcasing many dogs, several in Walkin’ Wheels dog wheelchairs. The video was created by Walkin’ Pets to raise awareness that disabled and aging pets are fully capable of having a good time! The video also features a rather relaxed cat, a goat in a wheelchair, and a snake feeling the groove wrapped on her owner’s arm atop a motorcycle.

The video is also being featured in the Top Dog Film Festival which kicks off in Australia this summer, and the Bow Wow Film Festival, which will be shown in theaters across the United States. Walkin’ Pets is delighted that filmgoers will see specially abled and senior dogs having fun and being active! TO THE PETS! can be found on YouTube as well: https://youtu.be/2rB8tVjj_aQ.