Dog Safety Belts Can Save Canine and Human Lives

Many families will be on the road this holiday season and may be unaware of  the dangers posed to passengers and canines by traveling with dogs that are not properly restrained. Wags to Riches Animal Rescue and Sanctuary in Washington state and HandicappedPets.com have teamed up to spread the word coast to coast about the risks of traveling in a vehicle with an unrestrained pet – easily remedied by putting a safety belt or harness on the dog.

Wags to Riches recently responded to two emergency calls concerning dogs that suffered needlessly because they were loose in their vehicles during an accident. One incident involved a truck rollover that had seven dogs in the backseat. During the rescue operation, one of the dogs escaped from the vehicle and was found 10 days later with the help of a cadre of volunteers. Two of the other dogs needed hospitalization. Another accident involved an older dog that was thrown from its car and had to paw its way up a mountain to be rescued, a full five days after it had been thrown from the vehicle. Dog safety belts or harnesses would have prevented both situations.

HandicappedPets.com notes that slamming on a vehicle’s brakes sends an unrestrained dog flying toward the windshield. This not only potentially causes serious injury to the dog, but also to the driver or other occupants in the vehicle. Furthermore, a loose dog in a car can cause an accident by creating distractions, obstructing view, or getting near the controls of the car or truck.

In addition, in the event of an accident an unrestrained pet can make it much more difficult for rescue workers to treat or extract people from a vehicle since they often have to restrain the pet first in order to get to the passengers safely. This can add valuable time to a rescue effort when time may be of the essence. 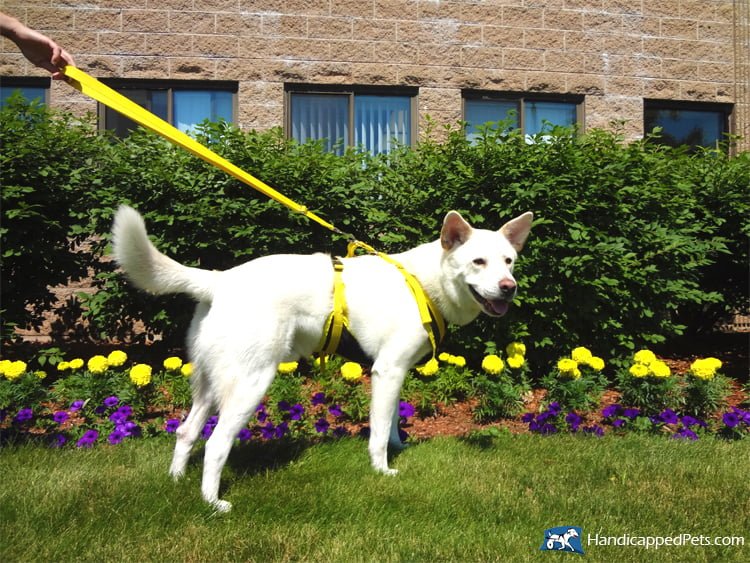 Wags to Riches and HandicappedPets.com advise:

– Use restraints that offer mobility. The restraint should allow some freedom of movement, but not too much. The dog should be able to move around a little and turn in the seat.

– Put the dog in the back seat. The safest place for a dog is the middle of the back seat. Airbags can be dangerous for dogs as well as small children.

– Don’t put a dog in a crate or cage. In an accident, a crate or cage will go flying through the air just like an unrestrained dog. If the crate itself is secured, the dog can still be slammed against the walls of the crate.

“I can’t describe the horror of helplessly spinning around and around and seeing my dog actually flying out onto the road,” says a blogger on the HandicappedPets.com website. Wags to Riches reports that when asked what they would do differently, the owners of the 10 year-old dog that was missing for five days said “Have a seatbelt for my dog.”

Wags to Riches Animal Rescue and Sanctuary, Inc. is devoted to providing new, loving homes for adoptable animals and a loving sanctuary for animals that are unadoptable where they can live out their lives without fear of desertion, starvation, or euthanasia. www.wagstorichesanimalrescue.org (509) 453-4155.