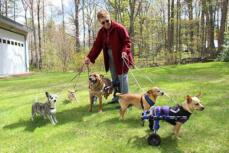 AMHERST, NH (May 16, 2017) – Ruth Dodge, of Loudon, N. H., came to the attention of Walkin’ Pets by HandicappedPets.com when she stopped by the online pet product company’s home base for a dog wheelchair in 2016. She had recently rescued a Chihuahua who had been hit by a car, resulting in the loss of his rear legs. Ruth purchased a Walkin’ Wheels for the little guy she named Beau, and he was on a roll! “They’re not wheelchairs,” she insists, “they’re just wheels!”

Walkin’ Pets found out that Ruth is a bit of a one-woman rescue, who has filled her home with rescued dogs and cats – five of each. Two of the dogs (including Beau) and one of the cats are medical fosters. Ruth lives in Casa Grande, Ariz., for half of the year, where she has a close relationship with the local Animal Control, who call on her when they have difficult cases. Ruth has a very big heart and opens it to those most in need.

Nani Pua (“flower” in Hawaiian), the matriarch of Ruth’s dogs, is a nine-year-old Australian Cattle dog who has rear leg paralysis. She has been “on wheels” since she was 10 weeks old, when Ruth saved her from being euthanized. Nani Pua grew out of her original wheelchair, which has been handed down to help two other dogs. “The fact that they are just about indestructible is such a financial relief,” says Ruth. “Can you imagine – after nine years, and they still look and work great!”

Then there are the other Chihuahua rescues: Roger (the other medical foster dog), who lived on the streets for two years in Arizona before Ruth rescued him; Mindy, who weighs less than 5 pounds; and Katie, a rescued brindle with a sweet disposition. The five cats – Gracie, Maxine, Lennie, Hazel Grace, and Jack – had difficult lives and/or medical needs until they were rescued by Ruth.

“The animals kind of find me! I don’t go looking for them,” says Ruth, although she does admit that she’s “been bringing something home” her whole life. Ruth’s background includes two science degrees, corporate training, South West American Indian jewelry distribution for 20 years, and a wall full of medals for fencing. The dogs and cats in her family of rescue animals are fortunate indeed to be in Ruth’s care. At this point, Ruth says, “The inn is full!” But she quickly follows up on that comment by saying that she is always happy to “help animals on their way.”

Walkin’ Pets visited with Ruth and her pets in her Loudon home and took video footage of Beau and Nani Pua, who modeled a few Walkin’ Pets products. They will be featured in product videos on the company’s website. Here is a short video clip of the dogs playing on the lawn from the photoshoot: