Some might say Mr Beebs was only a dog…

I have always dreaded the day that I would awake to find my Mr Beebs gone. After such a long hard fight I could only offer him one last kindness and that was to end his suffering. The mass inside his abdomen was depleting his blood supply and he had gone white in the gums and mouth and was too weary to lift his head. He began vomiting up bile with agonized wrenching. The ultra sound confirmed that his labored breathing meant he was fighting for every breath with so little blood or oxygen. I held his face in my hands and spoke softly to him , reassured him that I was there and the pain would soon be gone. Mine has just begun. 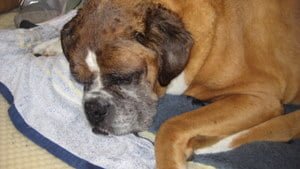 Its not every dog who can bring smiles and laughter, even comfort to aids patients, or frail elderly. Veterans without limbs. Families without loved ones on Sept 12th 2001 who buried their sorrow in his neck and held him tight as he absorbed their pain. Its not every dog that can calm a child with cancer or bring recollection back into the eyes of an Alzheimer patient. He sat on their beds, laid by their sides and delivered his magic. He touched hundreds if not thousands of people over his short lifetime.

Yesterday he looked at me while he labored for breath and with the final injection, a beautiful chapter in our lives came to an end. God wanted him back my angel with fur. I know in time I will feel less loss and pain…but not today. Today I am missing my bubs, my Mr Beebs…my friend, and a longtime part of my family. Mr Beebs changed my life and my mission jn life. He made me a better person.
Sydney,Tim and I will endure the emptiness until the day when we will join him .

I realized my career as an artist was over, that I was too old and the dream that I had developed and nurtured over a lifetime had come to an end….and Mr Beebs was there.

I had a friend/manager who worked for MCA records who believed in me and offered to help resurrect the dream. He died of pancreatic and liver cancer soon after at 54 years of age …Mr Beebs was there.

The national distribution deal I had with an independent record label went up in smoke and the only way left to promote a lifetime of work was with what ever money I had. The loss and debt this created left me with chest pains in the night…but Mr Beebs was there.

When early menopause came and I realized that I would never be a mother, a pain that so deeply rocked me that to this day I can hardly accept this loss…Mr Beebs was there.

As 30 turned to 40 and one holiday after another I sat at the family holiday table without a special someone …Mr Beebs was there.

When I walked down the path towards my the man i dreamed I would meet at age 49 …Mr Beebs was there. And during our vows he lay at my feet.Soft and furry, calm and respectful. He was there with a big I told you so.

Mr Beebs wasn’t just a dog. He marked the days, the chapters, and the years of my life. He made the rough path smooth and made the bleak years palpable. He gave his love in support without judgement or blame. He was a better role model than most people I know. He never saw a handicap no matter who he met and no matter what their infirmity. He was open, honest and true and when I say he made me a better person…its only because he expected that of me.

Some might say that we humans are more evolved. I’m not so sure. I have watched Mr Beebs not only comfort me but hundreds of strangers in his lifetime. He did it with ease, without reserve, and with gladness.

“He’s just a dog ” is the mark of the foolish human mind that has yet to see the magnificence of an animals beautiful soul.

Mr Beebs was a true and loyal friend through the best and worst of times. You can call him “just a dog” but I know in my heart and soul that he was never human. He was better than that.

Some exclusions apply. Free shipping on orders over $49 will be automatically applied at checkout for delivery within the continental US only. International shipping rates and shipping to Alaska, Hawaii, and Puerto Rico will be calculated based on order’s size, weight, and final destination. Oversized and drop ship products such as: Pet Steps, and Pet Ramps are not included.