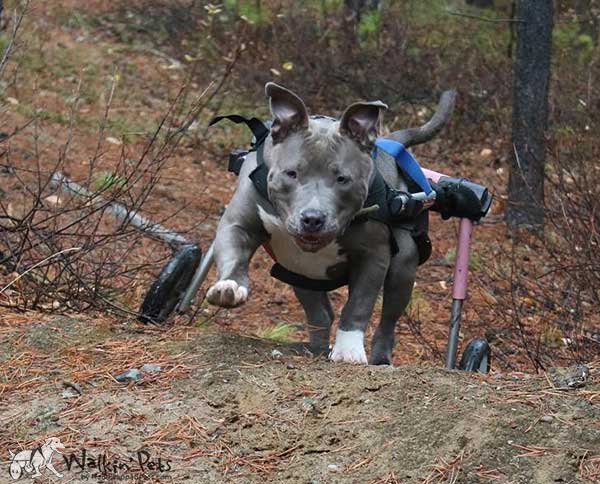 I first met Morag on the day that she was born. It was a difficult birth for her mom, so she ended up at the clinic where I work. Two weeks later, Morag was brought in when it became apparent that she was different from her littermates; she wasn’t learning to walk. Radiographs didn’t show any differences between her and an able-bodied littermate, so her hind legs were hobbled in the hope that it would fix the problem. It didn’t.

When she was six weeks old, her birth owners were very concerned for her future and didn’t feel they were ready to take on the unknown (daily physiotherapy? surgery?), especially since they live two hours away from us, the nearest vet clinic. They loved her so much, and it is apparent in Morag’s kind, trusting nature that she was fully nurtured. I give them full credit for raising a marshmallow. After thinking it over for a week or so, they surrendered her over to me.

From the beginning, her body was a mystery. She is strong and her hind end is well muscled. She can fix her position immediately when you change the placement of her feet. Her radiographs continue to be normal. She just can’t maintain balance on her own past a few steps. She moves like a seal (and barks like one, too!). One day I will take her south for a CT scan to see if we can find out the reason.

For now, she is a beautiful, happy, gentle puppy who loves every minute of the day. She amazes everyone who sees her running around in her Walkin’ Wheels. They have given her the ability to run around on top of mountains and jump into creeks. They are part of who she is now.

She spends her day at the clinic, enthusiastically greeting everyone possible, and doesn’t seem to be aware that she is different. A client recently asked if she could bring her teenage son to meet her. He is in a wheelchair, too. I think it will be really great for both of them. Morag is an amazing ambassador for Bully breeds, and special needs pets. It’s an honor to have been entrusted with her care.