Big Mac (Mackie) is my 13-year old baby full blooded German Rottweiler. He has been a part of my family since he was 10 weeks old.

Mackie was a tough little puppy with lots of spunk, however, I noticed that he ran differently than my Boxer, Augie. When Mackie would run, both of his hind legs would move in unison rather than alternating. At the time, I was new to Rottweilers and to all of the medical issues that came along with his breed.

I took him to see his veterinarian. She x-rayed his back legs and hips and informed me of what she had suspected – Mackie was born with hip dysplasia in both hips. It was suggested to me that he was in for a tough life with both of his hips in despair and that I should consider putting him to sleep. I thought that these people were crazy. A life is precious and he had so much life in him. He was a gorgeous little fella!

Throughout Mackie’s infancy, teenage, and young adult years, he got along wonderfully and I gave him no medication, as per the advice of his doctor. Occasionally, on rainy days, however, I would give him medication for pain. 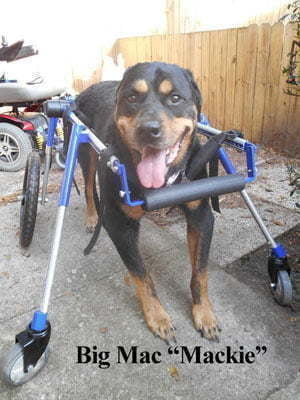 Mackie has always been a phenomenal swimmer. We would go to lakes in New Jersey, where he grew up, and later to the Bay in Tampa, Florida. He was a swimming fool! His doctor informed me that this was good and largely due to his hip dysplasia. Just to give you a general idea, Mackie would swim all the way out to the floating markers at the beach and back.

Mackie always compensated for his disability, and I kept a close eye on him to avoid a broken hip or any other type of medical problem. It was not until just recently, at the ripe age of 13 that his medical condition began to seriously deteriorate.

It was a day not unlike any other and Mackie was lying down in the living room. When I went to wake him up from his nap, so that he could do his business before bed, he was unable to use his hind legs to stand up. This went on for days. I had to carry him (121 pounds of dead weight) to do his business and get around. It was devastating and he was miserable.

A few days into this crisis, I brought Mackie to see his doctor. Through a series of medical tests and x-rays, the doctor determined that the back half of Mackie’s spine had completely fused together. The doctor said that this had gone on for years and must have been very painful. Between Mackie’s hip dysplasia and now his spinal condition, the doctor said that he was paralyzed from the lower half of his body down. Once again, it was suggested that I put him to sleep. Not going to happen!

I felt terrible. I felt like a horrible parent because I was completely unaware of his deteriorating spinal condition and the pain that he must have endured through those years. I had to move on and figure out a way to bring some quality of life to Mackie again.

I did some Internet research and I came across this website. The wheelchair had great reviews. I called and spoke with a company representative, Ms. Costa, and she went through all of the details and benefits of using their wheelchair. Thanks to my CareCredit card and the help of Mackie’s veterinarian, I was able to order the wheelchair.

At first, I just ordered the hind leg portion of the wheelchair thinking that Mackie would have the strength in his front legs to support and transport himself. Unfortunately, that was not the case. Mackie lacked the strength in his front legs. I was terribly disappointed and considered returning the wheelchair. However, I called Ms. Costa and discussed the problems that we were experiencing. Ms. Costa had the solution! We decided to turn Mackie’s wheelchair into a quad-wheelchair – meaning the wheelchair had four legs to fully support his body rather than just the two back wheels for support.

I will not lie – it was tough going to get Mackie adjusted to his new wheelchair. He just could not figure out how to maneuver, to say nothing about doing his business. However, we kept on keeping on with ten and then twenty minutes a day. It was tough going but then it clicked for him like a youngster learning to ride a bicycle.

Mackie began to walk up and down the driveway and then up and down the block. Then he learned to do his business while using his chair. His progress continued steadily until a sunny day when he independently stood up and walked across the living room to get a drink of water. I was stunned! From that point on, Mackie began to walk independently for short periods of time. I kept using his wheelchair every time he went out for a walk, however. I was diligent in his daily walks up and down the block in his wheelchair to continue his physical therapy.

Then something miraculous happened – Mackie regained full mobility and he is completely walking independently of his wheelchair. It is as though this medical crisis never happened. He has even begun to quickly walk after his ball in my yard while playing with his siblings. It is amazing and far beyond the expectations of his doctor.

Although his recovery has been amazing, I am a realist and I understand that his current state of mobility is fleeting. I know he will digress back into a state of being wheelchair bound but we are enjoying the independence that his wheelchair is providing him.

In summation, there are no two ways about it – Mackie’s wheelchair has provided him with mobility, independence, and quality of life again. Moreover, it has saved his life. Without this wheelchair I would not have been able to care for Mackie in his disabled state of complete immobility. Mackie’s wheelchair is his savior!