Learning to Live in the Moment with DM 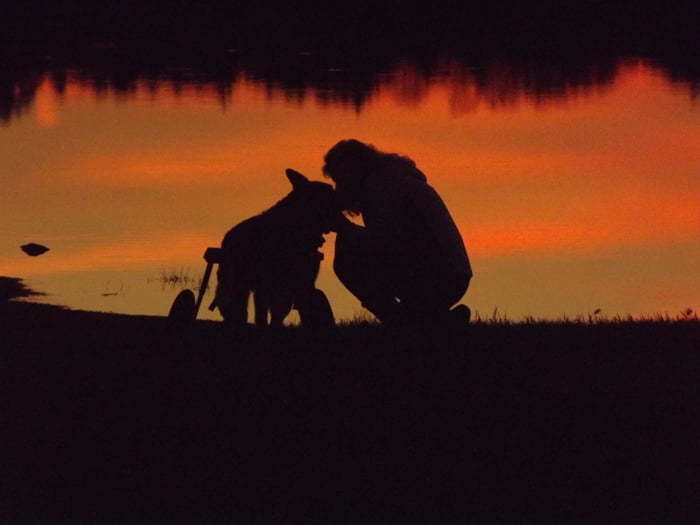 This week we wanted to share a memorial tribute to Lexus – a German shepherd that recently lost her battle with degenerative myelopathy in November 2014.  We are extremely grateful to Cheryl Bonnette and her family for sharing this special journey that they took with Lexus.  From the time Lexus was diagnosed with DM until the day she went proudly into the sunset, Cheryl learned the importance of living in the moment and ultimately realized that you simply know when “the time” is right.

We picked out our Lexus among a kennel of about 25 other puppies in August 2003.  She ran over to us immediately, and I knew she was the one. She immediately became one of our own, in addition to our twin boys who were 16 at the time. She never required any “puppy school”, being so easy to train myself, the usual sit, lie down, speak, stay, come  and of course fetch, I at one time regretted ever teaching her and at the end missed it terribly.  She was the BEST dog EVER.  She loved to come camping with us, and we so enjoyed her company. She had some issues along the way – melanoma of the eye ball and a plastic knee joint, but the WORST of ALL diagnoses was “DM” (degenerative myelopathy).

She had been having some issues walking and dragging feet, and I thought possibly it was her hips.  I remember that day like it was yesterday when the vet told me it was DM.  She explained  that the  good news is she doesn’t feel a thing. The bad news is there was nothing you could do about it.  At the stage of just scraping her paws, it wasn’t a huge deal.  Then, that night I made the biggest mistake by Googling it. I was absolutely floored, devastated beyond words knowing what my baby was going to endure and there wasn’t a thing I could do about it. I watched video after video of Lexus “twins” falling all over themselves. I cried for days and was screaming out at the world wondering how could this happen to my poor baby girl.  I guess when the vet told me her diagnosis, it didn’t register “degenerative” meant it would progress.  I learned that she would become paralyzed from the back forward until it reached her brainstem, though I knew I wouldn’t let it go that far. 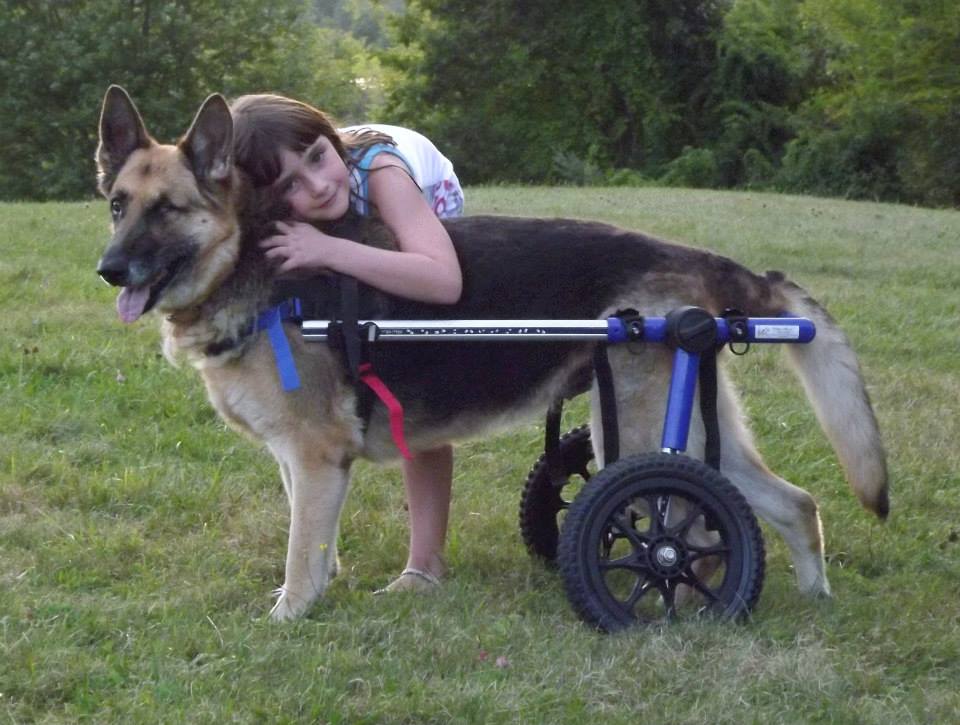 It took me about a week or two to “get a grip” and I moved to the land of denial for a while and just lived in the moment – one day at a time.  The one gift this disease gave was a heads up about how important time really was, and I never lost sight of that again. For the next 18 months, we lived in the moment without thinking of where we were heading.  Sometimes, there was frustration as the disease progressed.  Other days, we spent getting “comfortable” with the next transition phase.  Though I had drawn the line in the sand a few times, as to how far I was going to let this progress, it was easily wiped away at each stage as we “transitioned” together.  There were yoga mats on the wood floors so she could walk, tarps on the rugs when she became incontinent (the toughest part of all) and of course Walkin’ Wheels when she needed help walking.   She took to the dog wheelchair immediately, and we could barely keep up at first.

We were able to go for walks up until the day before “decision day”.  Though others including my hubby thought it was time since last April, I felt it wasn’t.  She still had fight left in her, and so did I until  one day last June after she hadn’t moved for a whole week. She would not get up for anyone or anything, so as I brought food and water to her and put her in diapers.  I made that awful decision at the end of the week for the following Wednesday.  But then a support group for DM on Facebook, which I found that spring and was a godsend, mentioned arthritis of her front legs since they were picking up the slack of her back legs.  Within 24 hours on meds, she was up and about again.  We celebrated her 11th birthday under her favorite tree that Sunday , complete w/balloons and goody bags and her favorite “cupcake cake”.  I was SUPER excited she was back and we were living in the moment and enjoying every second with her.

I now had a bucket list for the summer. After canceling a couple camping trips that didn’t allow dogs and rebooking somewhere else, we brought her on every camping trip that summer/fall,  complete w/diaper bag, wheels and everything in between, We went to the ocean.  She swam in the river. We even made it to the top of Mount Washington.  I enjoyed each and every second w/her, and picking up poop and wiping her bottom were now second nature.  I was so thankful for that extra time and special memories.  I struggled with the thought of putting her down, knowing with the summer over, winter was just around the corner.  Her best days were days she could lie under her favorite tree. 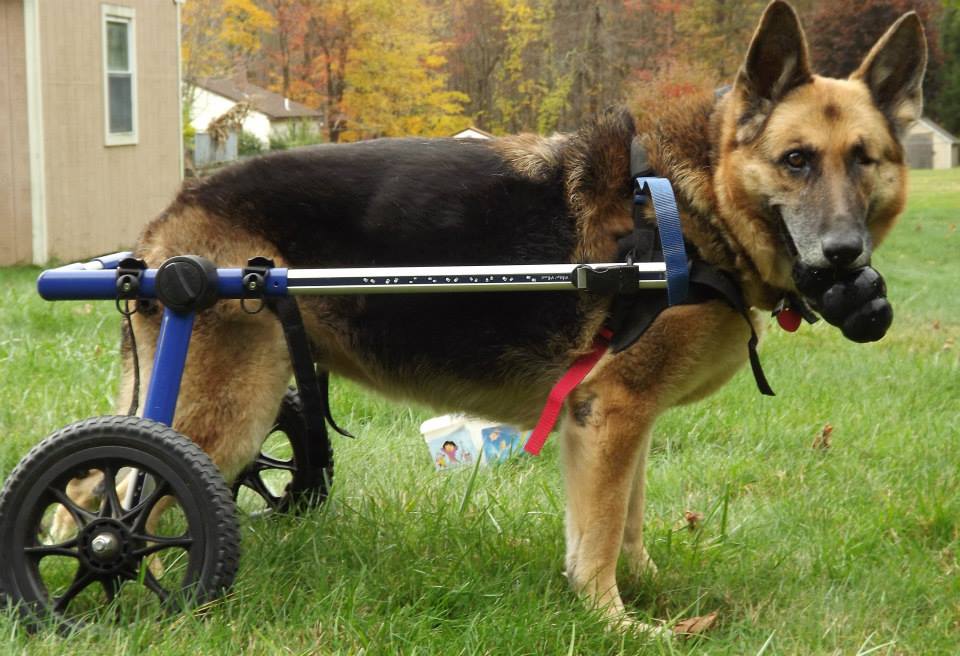 I wanted to wait for when she was “ready”.  But the lines become blurred as my husband noted, and I knew that I couldn’t wait until I was ready. Honestly, I don’t think I ever would have been ready.  I watched her when she didn’t know I was looking. I watched her out the window struggling to get up and move herself and then give up and lie down again. However, she would drag when my granddaughter came over, and always  be “on duty” when she was around.   She was after all a very proud German shepherd, who now each morning when I greeted her she would have both  her head and ears down, as there was poop or diarrhea all over the living room  No matter how many times I said, “It’s ok baby, mommy is not mad,” I could tell she was disappointed in herself.

Our days started w/baths and shampooing rugs, and when it was really bad a trip to the groomer.  I couldn’t let her continue to feel this way.  I wanted to let her go with her pride still somewhat intact.  I knew it was time.  I cried on and off for days, weeks before I finally made that “other” appointment.  She was completely down in back, I knew it was only a matter of time before it progressed to the front and she would not even be able to sit up.  I couldn’t allow her final months to be of sadness, and  I wanted things to end on a “good” note so to speak.

I wanted to remember her last summer camping with us, sitting outside under her favorite tree, barking at the neighborhood dog, and still “protecting” mommy. I did not to have a winter of her in the house 24/7 soiling all over herself, complete w/urine burns and sadness in her eyes.  So, I made the appointment for November 16th for the vet to come to our home and meet us under her favorite tree with her WHOLE family present.

On Saturday the 15th we went for our last family walk together with both my boys and their wives and my granddaughter. We walked to the reservoir.  We were all able to live in and enjoy the moment.  That weekend I gave her all her favorite foods as I was no longer afraid of what I was going to wake up to and didn’t really care.  She had prime rib, salmon and even a whole thing of cupcakes all to herself.

I was able to hold it together until I heard the knock on the door Sunday just after noon.  I thought I’d be able to be strong until the end for her. Sadly, I couldn’t.  I was able to stay with her on a blanket, under her tree and pet and love on her while telling her how much mommy loved her and I was going to miss her and she was the BEST girl ever, until her last breath.  What killed me the most for a while was that I saw a tear roll out of her eye. I wasn’t sure I was doing the right thing, but is the timing ever really “right” I wondered. In time, I believe it was better than watching her lose everything, especially her pride. Instead, she passed the way she lived, as the proud German shepherd she was.  In my heart, she is my baby girl forever, and yes, I am bawling my eyes out. 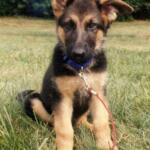 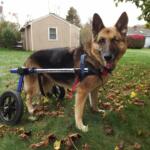 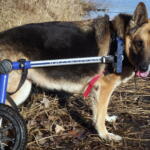 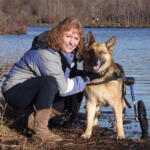 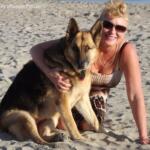 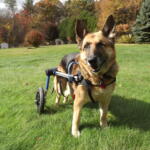 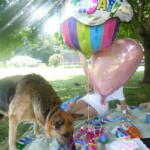 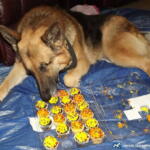 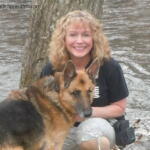 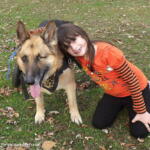