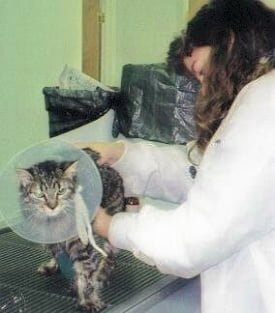 Expressing a cat who is lying down

I probably express (potty) Jaime differently due to the fact that she has posterior paresis (weakness) rather than paralysis. Thus, she has some feeling and control over the spincter of her bladder. She never leaks urine except when she has an infection and she cannot urinate by her self at all. However, she drags herself around like a typical paralyzed pet. Thus, she has a very tight spincter which she has some control over and her excessive tone (tightness) in that spincter is what makes her difficult to express. I never could learn to express her in an upright position even though I had numerous week long sessions with the vet and techs.

I put Jaime on a small table and sit on a footstool. I am slightly above her. I lay her on her right side on a soft towel and rub her back and talk to her to relax her. Then, when I feel her relax I place my right hand on her back and then, use my left hand and physically find her bladder and cup my hand around it. Then, I use that hand and both of my thumbs to trap the bladder and push towards her tail. The bladder will “roll” and you may need to reposition your hand and fingers in order to find the bladder again.

Using a “ragdoll” method to express a cat

The easiest way I found to do it was to hold him by his armpits so that his bottom and legs hang free over the toilet. Then, with your finger, trace his ribcage to the bottom of the ribcage, you should feel a little squishy bulb sometimes firmer depending how full his bladder is. Gently squeeze this between two fingers and move your fingers down while gently squeezing them together to his bottom he should pee freely. The animal may feel more comfortable with her feet on the ground in this position “standing.” If she does have use of her back legs, or she might not mind the dangling. It takes some patience and experimentation to find a way tat suits both of you. (Note: Not recommended for a recently injured cat.)

Kat’s bladder is sometimes near her ribcage and sometimes near her tail, sometimes in the middle of her body and sometimes over to one side (depending on how full her colon is…) I express (Kat) in two ways, I either go in from underneath, using my thumb on one side and first two fingers on the other, with the last two fingers curled up as a kind of “stop” to try and stop the bladder moving around, or sometimes I go in from above the spine, with the bases of the palms of my hands almost touching and 3 or 4 fingers on each side exploring to find the bladder. When you feel something kind of “rubbery bally” in between them, that’s it! It’s the only thing in there that feels like that. You can then press from above or keep it located with one hand while you go in from underneath with the other.

Expressing a cat over the litter box

Expressing an animal is tricky the first few times, but gets much easier with patience and practice. Mom expresses mimosa twice a day even though she is not incontinent. She has trouble getting in and out of a litter box, so at about the same time each day, mom picks her up & expresses her over the box.

Put your hand just below the ribcage and squeeze, moving down towards the hips. You can usually feel the bladder as a hard roundish lump. The bladder is slippery and can get out of your grasp easily. For months Mimosa knew just when to wiggle to make us lose her bladder.

When the bladder is against the hips – and so doesn’t have anywhere to escape to – you can squeeze the urine out.

I scruff him with my R hand, then I use the L one to find his bladder. I start at his ribs, just in case, but I always find it right between his hips. I then squeeze, readjusting my hand as necessary. I know I’m in the right spot because, frankly, his penis/scrotum start to twitch (sometimes a tiny drop of pee will appear, as well). I’ve never heard of that sign before, but it may be because he is, at this point, unneutered. Then pee usually rolls out with a lot of force, enough to even reach across the room. To say he squirts like a firehose is NO exaggeration!!

Kitties and young cats may protest being expressed

We’ve been expressing Mimosa for almost three years now, she STILL complains loudly. RRRRROOOOWWWWLLL!!!!!! She no longer thrashes like she used to. Legume complained with growls & scratching, but his bladder was painful. Mimosa’s bladder isn’t.

One night I was sitting at the table trying to express Jaime and I was so down. I couldn’t feel her bladder and I was too tired to take her to the emergency vet. I started rubbing the thigh of her leg and she peed alittle on my hand. Then, I progressed upward and rubbed her genitals she began peeing more and more. My vet and I were amazed. I used this technique for several months. When I used this technique I would rub her vigorously. I would rub her and then, let her rest and continued off and on for about 10 to 20 minutes. This solution was like a God send until I learned to express her. I couldn’t continue this indefinately because she got alot of infections but it got us through until I learned to express her.