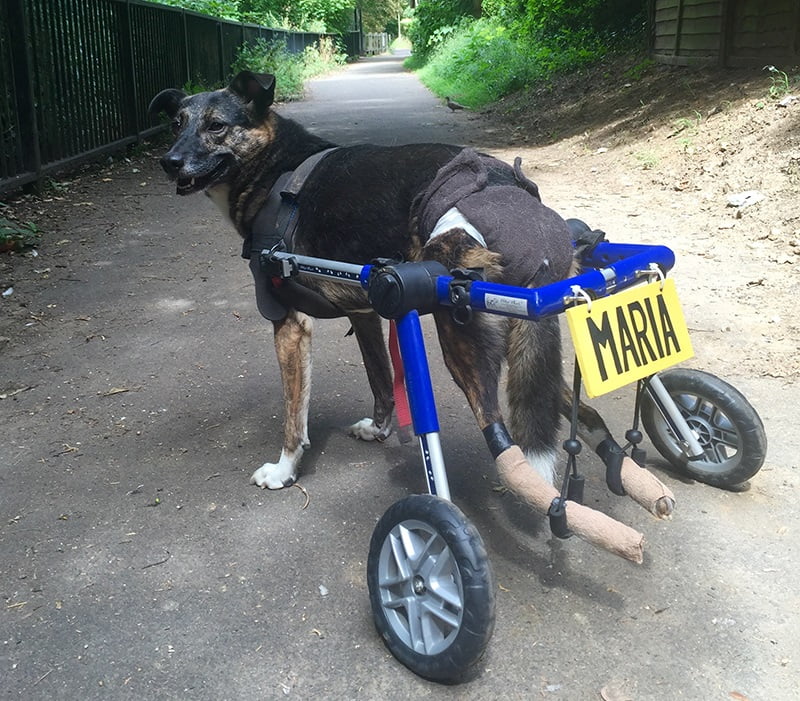 We had heard about Maria via social media, we are a UK based charity run by a mother and daughter team called Hessa’s Homeless Hounds. In Romania Maria was living in a car yard and one night a group of men broke into the yard, they set upon Maria beating her so badly that they broke her spine, they also shot her twice. She was found the next day and rushed to the vets where her spine was treated but unfortunately she was left paralysed in her back legs.

When she arrived in the UK a few months later we began gathering as much info as we could on paralysed dogs, we found Handicappedpets.com and set about fundraising for a cart for her. We were in utter shock when we received an email to say the amazing people at Handicappedpets were going to donate a Walkin Wheels cart for Maria, we were overjoyed!!

It was slow going at first with the cart but we persevered and now Maria can’t be stopped! She loves her walks, she runs after dogs and loves all the attention she gets from people when we are out. We are so overjoyed that Maria has been picked for pet of the week, we would spend hours reading stories and watching videos on your website of dogs living amazing lives in their carts and now Maria is one of them! We can’t thank you enough for giving her back her freedom.