HandicappedPets.com was thrilled to witness the first ever paralyzed dog in a wheelchair reach the summit of Mount Washington this morning, August 18, 2010 at 11:30 a.m. Lucy is a very high energy, active dog that has been using her Walkin’ Wheels for nearly two years. She and her owner Courtney Dunning of Peterborough, New Hampshire prepared for their climb up the Mount Washington Auto Road with several weeks of training which included increases in both mileage and altitude as well as a test trek up the first two miles of the auto road in mid-July. 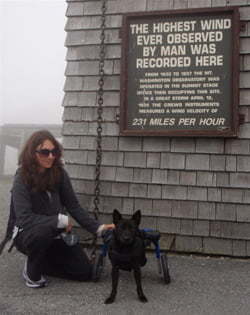 Courtney Dunning and her dog Lucy at the Summit of Mount Washington on August 18, 2010 after climbing the 7.6 mile Mount Washington Auto Road. The hike began at 5:28 a.m. and was completed six hours and two minutes later at 11:30 a.m. Lucy, a 4-year old mixed breed that was rescued from the streets of Puerto Rico after being paralyzed in an auto collision, is the first ever dog in a wheelchair to reach the summit of the highest peak in the Northeast.

Today’s six-hour journey to the summit of Mount Washington included several breaks for food and water as well as one diaper change. Accompanying Lucy on the climb to provide supplies and to document the adventure were a total of five people and one dog – Lucy’s canine companion Topper, a Chihuahua mix that was also rescued from Puerto Rico.

Upon reaching the summit earlier today, Courtney Dunning expressed how proud she was of Lucy and acknowledged the Mount Washington Auto Road and its employees for their support of the effort which included providing advice for the two-mile test trek in July, opening the gates at 5:00 a.m. today, and offering an extremely comfortable and enjoyable stage ride back to the base of the auto road.

“I think many people underestimate handicapped pets and do not realize just how much they can do given proper care and training,” Dunning explained.

Mark C. Robinson, President of HandicappedPets.com and inventor of the Walkin’ Wheels, was equally amazed and proud of Lucy.

“Lucy demonstrates how handicapped pets can continue to lead happy, healthy, active lives. The Walkin’ Wheels dog wheelchair allows dogs to do more than simply survive injuries that were once considered life ending. With appropriate veterinary care and physical training, dogs in wheelchairs can thrive and even reach levels of athletic achievement,” commented Robinson.

Some exclusions apply. Free shipping on orders over $49 will be automatically applied at checkout for delivery within the continental US only. International shipping rates and shipping to Alaska, Hawaii, and Puerto Rico will be calculated based on order’s size, weight, and final destination. Oversized and drop ship products such as: Pet Steps, and Pet Ramps are not included.