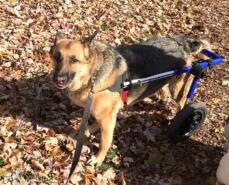 I adopted Bubbles three years ago from the pound, where she was dropped off with no name. She had just had a litter of puppies, she had almost no teeth (vet thinks she was caged or chained up), and she was clearly over-bred and not cared for. She was shy and fearful, but oh so sweet. She warmed up incredibly quickly to me because she knew she was safe.

The first few months were tough. She fought with my other dogs, bit a vet tech, and growled at every man that came around her. After working with her, she (Bubbles) became the sweetest dog I’ve ever owned, and she now trusts all people, even men.

About a year and a half ago, I noticed Bubbles back legs were swaying. I thought it was hip dysplasia, so I took her in to see the vet. When they did the X-rays, they discovered that she had been shot in her previous life and had bullets still in her leg and fragments in her tail. Even though all of that happened, the vets didn’t believe that was causing her issues in her back leg. We took her to a specialist and did a DNA test and discovered she had both of the positive strands for degenerative myelopathy (DM).

I decided I would do everything in my power to keep her up and moving and happy. I discovered the Finding the Cure for DM Foundation from Facebook, where they provide loaner wheels for a donation. This increased Bubbles life exponentially. She is completely paralyzed in the back, but when she gets in her wheels, she is back to being mobile and energetic Bubbles. Today she took off to play with the neighbor’s cat — something she couldn’t do without the wheels. She enjoys running through the leaves and beating her fur brother in races. Her brother is a 10-year-old Bulldog so he doesn’t move too fast. Bubbles has gained her freedom and independence with the wheels.