I wanted to take out some time to tell you something incredible. It’s a long story so I hope you save this letter until you have time to read it. 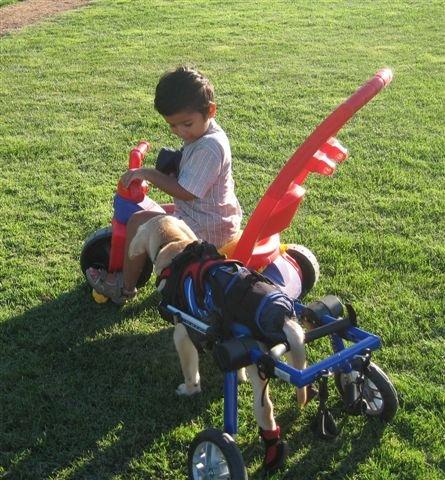 At the end of October 2002 I found Cody on my bed crying in great pain. It turned out he hurt his neck and shoulder and over the next three months ‘though getting Veterinary care became weaker & weaker. In January he had spinal cord disk surgery and again two weeks later in February when more matter was found. He walked in very weakly, he did NOT walk out. He was given back to us completely paralyzed, traumatized & no control of bodily functions. He could only move his head slightly when placed on his left side. 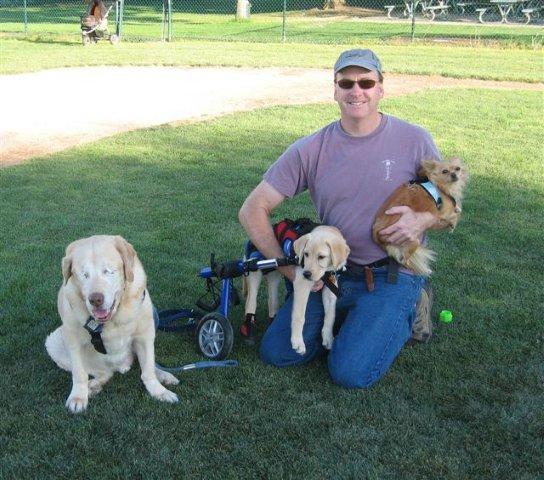 Several months later I discovered HandicappedPets.com.  I wrote the letters below to Mark in April to get some help. After researching on the site, we decided to help Cody by going to the Vet we chose to holistically treat Chelsey  (our  cocker spaniel & Cody’s best friend who tragically died amid all this ) . We scheduled several sessions with this Vet to give Cody Proton Beam therapy. I have no idea if what happened next was the result of that therapy or not.  The next day after that first session, Cody was able to curl up for the first time in three months. A few days later one of his legs started to move. My Sister-In-Law  Rachel (who helped us immensely) first noticed it.

Cody had just stopped leaking but was holding back urinating when I first wrote to Handicapped Pets, and we were scared to death when we couldn’t even express his bladder A number of times he held back for more than 48 hours . Several times we had to rush him to the vet to be catherized & other times he released his bladder in a flood .  The flood only happened  when we had sat him outside a couple of times & once when we took him out with us shopping to buy him a special mattress. It dawned on me that a pattern was developing, so I started to lay  him on his side outside on a diaper and a hospital pad and low and behold he eliminated. OF COURSE, Cody didn’t want to go in the house. Once he gained control he wanted to go out.  He was trying to be a good boy and hold it for outside. Wow, that poor dog all that catheterization and us trying to express him…….Thank God I put it together.   What a relief and major step forward.

Over the next few weeks, Cody developed more movement in his hind legs. Then a little in his front. He now was able to curl up and stretch out. Which was more movement then we had seen in almost four months. On the fourth week, while my husband Howe and I were sitting him outside to go, I lifted his tail. As I lifted it, he began to stand up. He leaned against me for balance, but what a surprise.  My husband and I looked at each other and then let out a cheer. Boy did  Cody’s tail wag? Two days later on Sunday morning May 25th, 2003 he stood up on his own & ate his food and then sat down when he was finished. As if this was an every day occurrence-we were amazed. Once again we clapped and Cody’s tail thundered against the floor.  That night (early morning) at 1:00AM May 26th he stood up again and this time took his first step. IT WAS MY HUSBAND’S BIRTHDAY and  the  marked the beginning of  Cody’s journey back. He looked up at us sheepishly, & you got it, that tail wagged a mile a minute.  Two days later I get a call at work from my husband, he said, “I have great news, Cody just got up and began to walk” “he knuckles but with practice I know he’ll be able to do it”. I broke out in tears of joy…………………… One week later Cody CAN walk. The knuckling has all but disappeared. Yesterday he even ran a short distant across the grass and walked half a block before tiring. He’s as happy as a lamb and we’re ecstatic. Everyday our boy gets stronger. I swear he looks like he’s prancing.

My Birthday was so sad  when Chelsey died. We miss her terribly, and will always remember her sweet little face. but my husband’s birthday was a miracle filled with joy.  Our Cody gave him the best gift.  For the people who come to HandicappedPets.com I want to tell them to hang in there. To the people who read the SmallPaws letters & know the hard work they put into saving these animals, the Love you get from them is immeasurable.  Cody was a half starved stray who we saved, nurtured took into our home and fell in Love with seven years earlier. So many people don’t give their dogs a chance to heal. Granted not all dogs will get up again,  but some will. We are the lucky ones. We worked real hard at it. We never let his muscles atrophy. We turned him every 2 and a half hours and never left him alone too long. One of us was always coming in and out to sing to him, rub him, exercise him, give him snacks and keep p him going. We would have Loved him no matter what. We did not listen to those who said “put him down, it’s cruel ” or “He is suffering” or “He is not living life like a dog”. Even the second surgeon said because Cody needed help to do everything “That’s no way to live, not for you or for him. He’s not improving!” (that was after three weeks after she performed the second surgery) then she said ” think about putting him down” . We were appalled. Cody had a right to live. So we were inconvenienced. He’s a beloved family member! We knew he had the will to live. I knew when I brought him food in the hospital, and  he ate it from my hand.  My husband, my sister-in-law & I knew when we looked into his beautiful eyes, he wanted to live, and so he does….and so he does!

Well that’s our story. I know it’s long but it’s Cody’s miracle and I want to shout it to the world and I wanted to share our story.  Don’t give up. Whether they are sick or from puppymills or strays or paralyzed they are the best of us. They give us unconditional Love and deserve nothing less in return

Thanks for your kind words and help when I needed it.

We took him for his first real  around quite a few blocks walk (with a harness and a leash) last night. He stopped every half block or so and intensely looked around. I don’t know if he was resting & taking in the sites or looking for his friend (our late beloved Chelsey) as he never in seven years took a walk around the block without her. Never the less I was rooting him on all the way and my heart was bursting. (People must have thought I was nuts watching all the carrying on I was doing). One would never know that two and a half weeks ago he couldn’t walk & had just come out of a four month paralysis.  I hope our story brings hope to others. I’ll get that picture as soon as I can.

Thanks again to you and everyone at your site.

Every day that goes by brings him more strength. He’s even managing to climb up and down a couple of stairs. It’s great fun watching him succeed. He still gets very tired but we know in time he will regain his strength.