Canine osteosarcoma usually appears in large dogs, often in the legs. Sometimes the tumor originates in a place where an earlier injury occurred. Warning signs include limping, especially progressive lameness, and swelling. The cancer weakens and destroys the bone as it progresses, which can sometimes result in fractures.

This is a primary tumor, which means that the cancer originates in the bone and then moves elsewhere in the body. It is extremely aggressive. The cancerous cells tend to metastasize first to blood-rich cells, such as those present in the lungs. Frequently, by the time the dog manifests visible symptoms, such as limping or swelling, the cancer has already spread. Repeated coughing is a sign that it may have invaded the dog’s lungs. Treatment options include surgery, radiation therapy, and chemotherapy. The traditional surgical option is amputation, but recently a few universities have been performing limb-sparing procedures. This usually involves removing the tumor and strengthening the limb with a bone graft. Whatever surgical option is chosen, it must be combined with chemotherapy and/or radiation therapy in order to be effective. This is because surgery removes the main tumor, but if the cancer has metastasized to the lungs or spread elsewhere in the bones, it will only continue to advance.

Chemotherapy is very effective at killing any remaining cancer cells present in the dog’s body. Basically, it is the process of injecting or administering orally a combination of drugs designed to target cancer cells. Chemotherapy drugs kill cells that grow quickly, like cancer cells. (Other fast-growing cells include those in the hair follicles, which explains why chemotherapy can cause hair loss in humans.) The idea is to kill the cancer cells without permanently damaging other, healthy ones. Most dogs don’t suffer any side effects from chemotherapy, when it is administered properly and by a board-certified oncologist.

Veterinarians have a wide range of narcotics available to control pain, many of which are also approved for use in humans. As with humans, however, these drugs may inhibit a dog’s responses. He or she may sleep too much, or seem woozy or dazed. If this is the case, the veterinarian may suggest delivering the narcotic through the dog’s skin, in the form of a patch. This method has risks of its own, but can significantly enhance the quality of the dog’s life.

By the time you take your animal to the vet to see why they are starting to limp the vets say that it has probably already spread to the lungs but it is just not visible on any x-rays yet.

We went ahead and did the amputation & the chemo and were praying that maybe just maybe she would be one of the lucky 10 % who could be cured. Almost always the canine osteosarcoma cancer is fatal. Survival rate can be 2 years or more but the cancer usually gets them. Angel was not a lucky one. With over 7,000.00 of vet bills and 8 months later she still died. We hand fed her with a wooden spoon and spoiled her silly. We had big fluffy pillow for her to lay on the last couple of months after we found out it had spread to her lungs. We knew it would only be a matter of time.

Then they get weak and it’s hard for them to even go outside and do their business anymore. So.. You have to use puppy pads to keep them from feeling like they have to get up and travel to the door to go in the yard. It got to be a real chore for her.

There are so many things the vets do not tell you and when anything strange happens you are on the phone trying to get someone to call you back and help you. We have mixed feelings about the whole ordeal.

We do not regret doing what we could to extend her life but we were really not happy with the unknowns we were not told may occur and then when they did, that’s when we were told. We loved her so very much that it put us in a situation that we were willing to do anything.

I was unhappy about the way we could not get in touch with the vets and other things that angel went through that we did not know that would occur. Her nose would bleed sometimes. This scared us to death. She looked to us for help. It was very sad but also at the same time she knew we loved her and were doing all we could to help her. She really never appeared to be in any pain though.

We thank God for taking her quickly and merciful and she died at home ad we did not have to put her down at the end.

Here is just one link that is a good one out of the many many ones we found that we read about. You can imagine all the research we did on the internet to learn about this cancer. Its the worst kind a dog can get.  Canine Osteosarcoma (canine) – veterinarypartner.com – a vin company! [1]

These are just a couple of stories from others we read. They will break your heart.

My black german shepherd mix, Bandit, was also diagnosed with an osteosarcoma tumor to the distal radius of her right front leg in April of 2001. We also made the difficult decision to amputate, and we followed with carboplatin/doxorubicin chemotherapy. She sailed through the surgery, recovery, and chemotherapy with no problems at all. 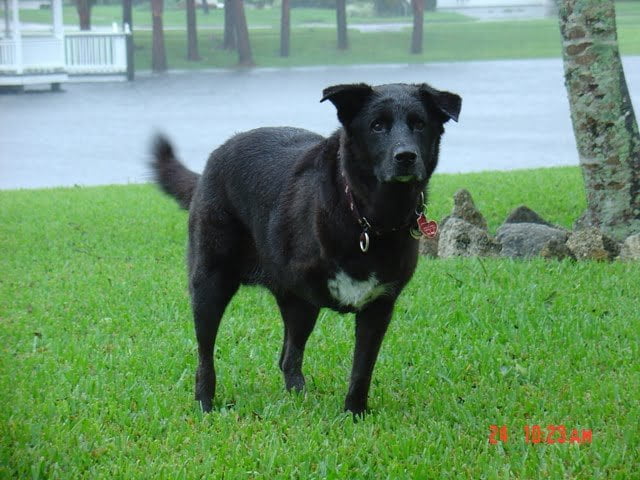 As have many other dogs, Bandit has been in remission for over 5-1/2 years so far. An excellent source of support and information regarding canine osteosarcoma is the yahoo bone cancer dogs group.

Don’t give up. There IS hope.

Like Liz says above there IS hope and it is important we do not give up. Alot of general vets do not come across enough cases of Osteosarcoma (bone cancer) to have a full and complete knowledge of the facts. Often people are told their dog is not a good candidate for amputation, and through research these same people have found the vet was wrong their dog is a good candidate for amputation, they have gone through with it and the dogs have coped wonderfully well even the big breed dogs, some of these have had acl problems and athritis etc but have all coped fine with amputation. On diagnosis it is really important to see an oncologist if it is at all possible, they will xray the lungs, and depending on the results talk you through the different options available.

We went with amputation and chemo like Liz did with Bandit and we have also had wonderful results, it will be 7 years ago this christmas that our dog started to limp, the diagnosis was not made until the following April, we then did amputation and chemo and we still have our dog too.

I recommend you to join the bonecancerdog group Liz mentioned there is a wealth of information in the files and alot of members who know just what you are going through and have alot of invaluable good advice.