Braveheart Didn’t Give up

A husky mix, Braveheart was hit by a car 14 months ago. We tried, unsuccessfully, to save his right rear leg, but after 3 surgeries and much rehabilitation, amputation was the best course. But he didn’t give up, and neither did I.

I agonized over it and I remember spending the night before the amputation surgery reading your website at HandicappedPets.com. It was the only thing that got me through that night. Thank you. I promised myself I’d send pictures when he recovered so that other people might find hope too in our success story. I will send pictures of him over the last year and feel free to use the ones you feel would be helpful.

He was badly hurt, and not just the one leg.

He “died” on the table when we brought him in to the vet immediately following the accident. We sat with him for several hours and the vet pumped fluids into him until he could absorb no more.

They were sure he wouldn’t make it through the night. Both sides of his pelvis were broken. His ribs were severly bruised and he had a severe concussion. They all thought Braveheart’s story had ended. I didn’t.

All of a sudden he raised his head, his eyes partially swollen shut, and sat up looking dazed and confused. Everyone, including the vet, was amazed.

I found the best orthopedic dog vets and Braveheart went in for surgery in 3 days.They wanted his lungs and chest clear and the swelling to subside in his head. The surgeon pinned and plated both sides of his hips and fully expected Braveheart to be able to walk out, albeit gingerly the next day.

I got a call the following morning. Braveheart’s right foot was not responding to stimuli. Apparently there was nerve damage. He also was not able to pee on his own and so they kept him for a few more days. When we brought him home he still had no sensation in his right foot and there was danger of his bladder bursting so we had to express him manually by pressing on his bladder several times a day to help him urinate.

This continued for over 2 weeks and we were getting concerned. It was exhausting for us and for Braveheart. He had to start peeing on his own and soon.

I remember the moment when he blessed us with his first unassisted urination. Both he and I probably felt a similar flood of relief. The tide was beginning to turn.

He wasn’t using it correctly. He had no sensation in the end of his foot and it knuckled under. He had to undergo a procedure called salvage surgery and the pin had not been able to hold the pelvic bone in place. His right side had collapsed. I took him to physical therapy where he did the treadmill in the water excercise. I did range of motion 3 times a day and we splinted the foot so he had to walk correctly without knuckling under.

That night Braveheart made the choice for us. He chewed on his toes to the extent that the vet told us what needed to be done. I knew that Braveheart would do fine as a 3 legged dog and we agreed to the amputation.

I have made it my mission to give him a wonderful life and we have become the best of friends. Nothing daunts him. He runs like the wind, much to the dismay of local squirrels and rabbits. He still jumps up onto anything and everything, chases Cleo, the siamese cat, plays in the snow, and wrestles with my husband Bill. Braveheart adores going for rides and goes everywhere with me.

One less leg? Braveheart doesn’t mind a bit! There is no question as to the excellence of his quality of life.

I hope Braveheart’s story can help someone to decide about life or death for their pet. I’m not suggesting that it’s easy. It’s overwhelming while they’re recovering and whole process is filled with doubt and sadness.

If, though, you have the courage to commit to this path you can build a deeper relationship with a fabulous companion, and know you did your best for your friend.

Attached are some recent pix of him and some friends. He’s doing great and I’ve decided to start a dog boarding and day care service because of him and all I’ve learned. 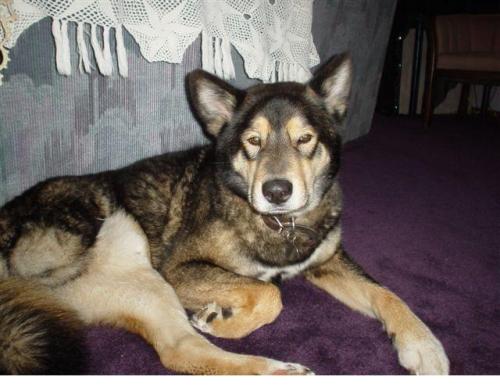 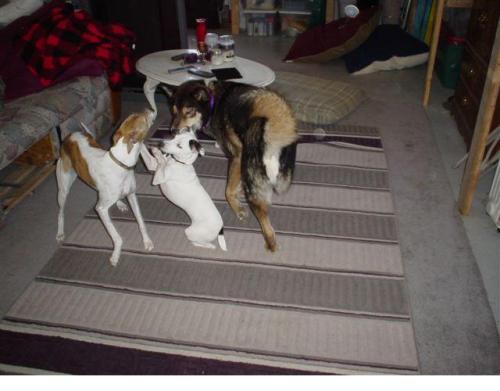 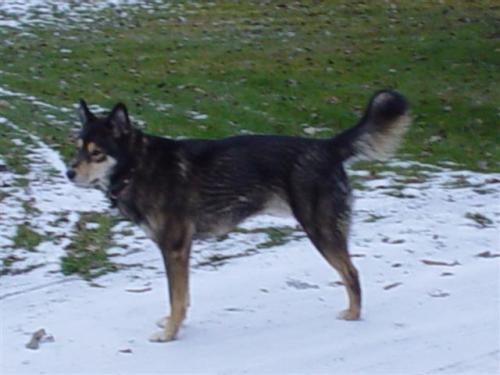 This page has been responsible, in part, for a donation of $50.00 to

All rights reserved (c) Copyright 2004. Do not reprint without permission from the author.