Photo above of Coke and Michael Baines, featured in the 2018 Walkin’ Pets Calendar.

Michael Baines, widely known as “the man that rescues dogs,” was fairly indifferent to dogs in his earlier life. It took a chance encounter with a stray dog to change all that. Now Michael rescues hundreds of dogs — many of them starving, disabled, and otherwise unwanted.

Indeed, Michael says he didn’t really care about dogs until a chance encounter that changed his life. Michael has long been in the restaurant business. Back around 2011, a stray dog came around as strays often do at restaurants, seeking food scraps. Michael says,

“It’s hard to explain what happened.

The dog looked into my eyes and said, ‘Help me! I’m hurt. I’m hungry.’

She touched my soul.”

That dog became the first dog of many who he would rescue from that day forward. Chance encounter? Or meant to be?

But let’s back up a bit. What’s a Scottish born restauranteur who lived in Sweden from age 2 through 33 doing in Thailand rescuing dogs? Well, Michael first visited Thailand when he was 33 and shortly thereafter decided to relocate there with his wife. That was 15 years ago.

At first, Michael began adopting dogs into his own home after pet sitting for a neighbor and discovering the joy that a dog can bring into a home. He now lives with 11 dogs.

“These were dogs I adopted because I thought nobody wanted them. Eleven dogs is my limit,” Michael joked. “Twelve would be crazy, right?”

That said, Michael takes care of a great many other dogs as well, with whom he is quite closely connected. Here’s how it all unfolded. 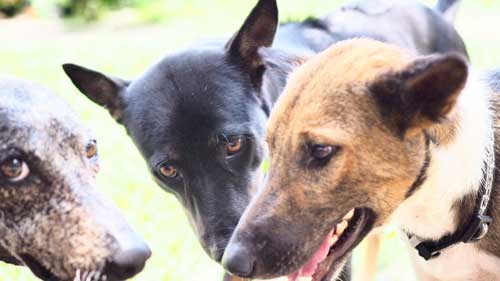 After that first rescue, Michael’s heart seemed to be on the same wavelength as the many stray and disabled dogs he encountered on his way to/from work and who came around his restaurants begging for food. He began to feed them and provide other forms of care, as he was able.

One of the dogs he met with every day was Coke, a puppy who Michael knew had a caring owner, but who enjoyed interacting with Michael on his walks. One day, Michael noticed that the vivacious “goofball” wasn’t at his usual waiting place for Michael, so a few days later, Michael knocked on the owner’s door to inquire about Coke.

He found out that Coke had been hit by a motorbike, causing his hind legs to become paralyzed. A few weeks later, Michael brought his veterinarian to the home, and the vet confirmed that Coke’s back was broken. The next day, Michael suggested to the owner that she make a wheelchair for Coke, and showed her a design he had drawn up. Instead, the owner implored Michael to adopt Coke.

“So I took him home,” Michael said.

He put Coke into a Walkin’ Wheels dog wheelchair, and Coke hasn’t stopped running ever since! Coke has touched many people’s hearts; take a look at this video to see why:

So what started with one dog grew to a self-imposed mission to feed dozens and dozens of dogs on a daily basis; dogs who hung around the restaurants Michael managed or who he met along his usual walking routes. Since then, he feeds and cares for his canine friends day in, day out.

Michael also helped out with an organization that rescued dogs. He eventually helped build a shelter for them with the help of funding from the restaurant company he worked for.

Then, Michael opened his own restaurant, now called Red (formerly Carrot). Meanwhile, he continued to rescue dogs from the street, many who were injured or disabled and needed extra help, keeping them in a room above the restaurant. Michael attempted to explain what it is he loves most about dogs.

“They’re honest. They don’t lie. They live in the present. Dogs are good!”

In 2016, an online media news company called Newsner made a video of Michael feeding stray dogs — simply doing what he does every day. The video was shared by many other online outlets. It went viral — very viral. 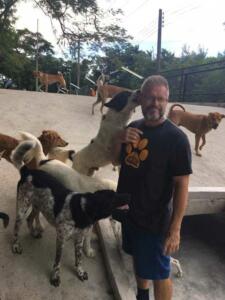 Subsequent to all the media attention, Michael and a partner set up a nonprofit rescue organization out of Sweden. They used donations that came in to rent a house in May 2016 to be used as a foster home for rescued dogs.

Then Michael hired staff, and the work has expanded from there. The nonprofit has been working collaboratively with a Thai municipality that was running a very small, poorly equipped shelter for 90 dogs.

With the collaborative help of Michael’s nonprofit, they expanded the shelter to 1,800 square meters, inclusive of a nursery area, “dog” swimming pool, office and kitchen. As a result, it can now serve 160+ dogs. 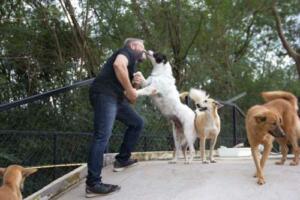 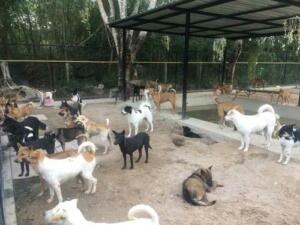 The dogs currently living in the foster home — most of them special needs — are also scheduled to move to the shelter within the month. Many of them need more intensive care due to blindness, paralysis, or other special needs. Michael and his staff rescue, feed, medicate, clean, and provide love for all these special dogs. 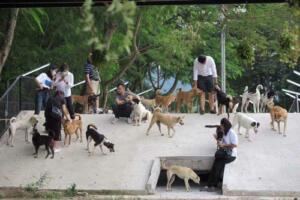 Shelter funding for municipalities is determined by the Thai government. To this end, Michael works with the local mayor, veterinarians, Thai health and livestock departments, and a local university so that the problems are more thoroughly acknowledged and understood.
Consequently, Michael’s collaborative approach can serve as a model of success for other municipalities to emulate.

Many of the shelter dogs are re-homed/adopted within Thailand. Re-homing is an in-depth process which takes five to seven days of interviews to complete. Only then would a dog be placed in a home. Some dogs are adopted abroad, primarily to Sweden, Canada, and the U.S. (usually for the larger dogs, who can be harder to place in Thailand).

On a Personal Note

Michael’s life revolves around the dogs. For example, he works 12 to 14 hours with them every day. Besides the 11 dogs who live with him, he sees the dogs in the foster home as his dogs, as well as the “gang on the streets,” and the dogs in the shelter. Michael lightheartedly remarks,

“Sometimes I feel like I have a mistress — seeing other dogs during the day — and then coming home to my 11 dogs at night!”

It was about at that point in the Skype interview used to create this blog post that Michael’s t-shirt was noticed. Here are photos taken of the computer screen during the Skype session: 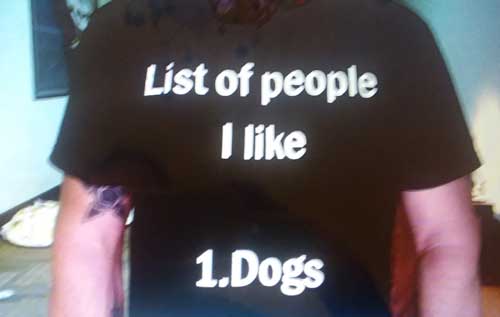 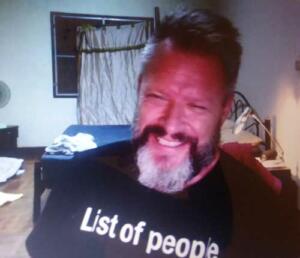 So what happens when a dog touches your soul? In short, there are two things you should expect: 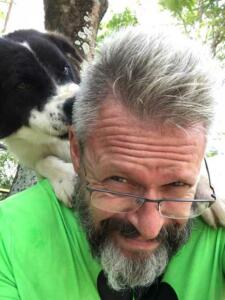 Rescued four puppies yesterday, got other dogs spayed/neutered later in the day . . . every day is different.

I like challenges; I have a big drive for big challenges. It’s a game. I like a game.”

Speaking for all the lonely, hungry, sick, and scared dogs out there — as well as all the dog lovers in the world — we can all say,

“Michael, we’re sure glad you’re in the game!”

To find out more about Michael’s work, to be part of it, or to donate, go to his Facebook page or his website: https://tmtrd.org/.

Did we answer all your questions on "rescue dog"?