This blog is posted on March 13 in honor of Trevor Maroshek’s birthday and National K9 Veterans Day!

Navy SEAL vet Trevor Maroshek might not still be here if not for the valor of his k9 partner Chopper. The beloved dog saved Trevor’s life on many occasions! Now Trevor is doing everything he can to help Chopper enjoy the rest of his life with dignity and in comfort. Together, they are working to make life better for veterans.

Trevor joined the armed forces and became a Navy SEAL after 9/11. He was first deployed to Iraq, then southeast Asia. On his third tour, he was asked if he had any interest in dogs. When Trevor responded affirmatively, the course of his life was forever changed.

Historically, dogs have long been used as combat partners in various branches of the military. But this was the first time the Navy SEALS were attempting a “dog program.” Trevor was asked to start the program from the ground up – and with virtually no guidelines.

The first course of action was to choose a dog. Trevor chose a massive German Shepherd Dog, Chopper, out of a lineup of three potential k9 partners. Chopper had been raised in the Czech Republic, and now, at 18 months, he was ready to become Trevor’s k9 combat partner.

Trevor immediately treated Chopper as a trusted partner, popping him in the front seat of his truck for the two-hour ride back to base. They took courses together, trained together, and quickly began to work as a team.

Building trust was key to their success. Trevor made sure that he introduced Chopper to every type of environment. He ensured that nothing would create a situation where Chopper could become a liability rather than an asset. He even took Chopper surfing, which was one of Trevor’s favorite activities when he was growing up in California.

Trevor began integrating Chopper into numerous SEAL training opportunities. He became an expert dog handler and was instrumental in developing the SEAL’s Multi-Purpose Canine program (MCP). The MCP is now renowned for its canine applications and accomplishments, and the new training techniques that Trevor developed are now used by trainers in all walks of life.

Because dogs can see, hear, and smell the enemy well before humans can, they are highly valued in combat. Chopper was able to thwart ambushes, find explosives, and root out enemy combatants. Trevor witnessed this firsthand on many occasions, perhaps most notably in Afghanistan, when Chopper sensed Taliban forces in the bushes, who were much closer than Trevor had realized. Trevor recounts,

“I wouldn’t be here today if it weren’t for that dog. He allowed me just enough time to get the drop on the guys.”

Trevor retired from the military in 2012, after serving for 10 years in active duty. Once home, he experienced some post-combat physical and mental challenges. Fortunately, Trevor was able to get Chopper assigned to him as a service dog in post-military life in California, thus paving the way for other veterans to be able to do the same with their dogs.

Service or therapy dogs can help veterans in a variety of ways. Just petting a dog releases serotonin, an important chemical in the human body which can improve mood (low serotonin levels are linked with depression). But did you know dogs can also serve as matchmakers? Team workers as usual, Chopper was instrumental in Trevor meeting his wife Ruj. They met when she asked Trevor if she could pet his dog!

The depth of the bond Trevor shares with Chopper cannot be overstated. Reflecting on their bond, Trevor says,

“He’s a part of me — part of my finger, arm, eye. He saved my life! I’ve never been so close to another being.” 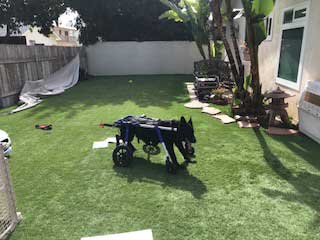 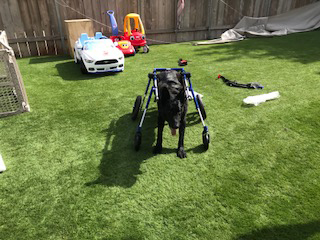 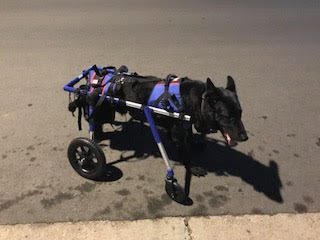 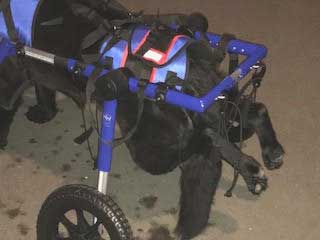 Trevor has channeled what has given his own life such value to founding the SEAL Dog Foundation (SDF) to help wounded warriors. The Foundation, which achieved 501©3 status in 2017, assists veterans with obtaining therapy or service dogs. It also provides training to veterans who want to train their own dogs to become their service animals.

Therapy/service dogs help veterans heal from combat-related emotional or physical injuries, such as Post Traumatic Stress Disorder and Traumatic Brain Injury. SDF provides food, shelter, training, veterinary care, transportation, and other resources to assist in the placement and training of the dogs. Many dogs are brought from kill shelters and then matched with master trainers.

The Foundation helped 14 dogs and service men in their first official year as a nonprofit, which is a great accomplishment! Trevor says the healing begins immediately when a service or therapy dog is paired with a veteran. In addition, the veteran learns dog training, which is a valuable life skill and a potential source of employment.

Thus, with Trevor’s incredible zeal for life and drive for achieving excellence, you can bet that the SDF will help many more veterans and dogs in the days and years to come. Finally, be sure to check out their website and see video interviews of Trevor and Chopper on the SDF media tab.

SDF relies on donations to get the job done, so please consider making a donation to support our veterans with this unique and life supporting program! 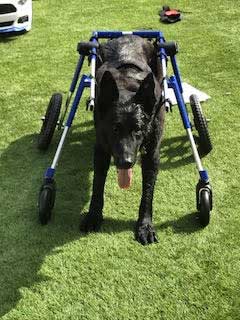 Did we answer all your questions on "Military K9"?