A turkey in a wheelchair isn’t something you expect to see at a farm. But the Odd Man Inn Animal Rescue in Washougal, WA isn’t your average farm. The Odd Man Inn has become a sanctuary for abused, neglected, and unwanted farm animals to find a safe haven and a forever home. With the belief that all animals are special, and even those animals with special needs deserve special care.

Bill is a 60 pound turkey with a bum foot. Turkeys spend most of their days on their feet, due to his size and injured limb this is difficult for Bill, especially when his caretakers have to flip him over to change his bandages (a process Bill hates!). The Odd Man Inn works closely with the Exotic Vet team at Washington State University to make sure he gets the best care possible.

Along with his bad foot, Bill’s vet told him he needed to lose some weight. Helping Bill stay active and caring for his bad foot, his caretakers knew it was time to get creative, taking a full support, four wheel Walkin’ Wheels wheelchair (designed for a dog) they converted into a turkey wheelchair!

Building Bill the turkey’s new wheelchair took a bit of ingenuity. The farm has worked with handicapped animals in the past so an animal in a wheelchair wasn’t new. But a turkey wheelchair was definitely a first!

How’d they do it? By devising a sling system to attach to the existing Walkin’ Wheels frame, they were able to support Bill from underneath, allowing him to get the exercise he needs without his body weight dragging him down. The wheelchair helps them to “lift” Bill like a car getting an oil change, which helps with bandage changes!

Bill loves it, he uses his wheelchair several times a day and his caregivers say he’s totally relaxed and building enough strength that he’s even be able to get around on his own a bit!

Meet the Other Special Animals Who Call the Farm Home

Bill isn’t the very handicapable animal to call the Odd Man Inn home, here are a few of the other special animals who have been given a second chance at life:

An amputee pig, Eppah came to the farm with a crushed back leg and a broken pelvis. Now she gets around just fine with the help of her Walkin’ Wheels!

A cow in a wheelchair isn’t too common, but Spock cruised through the farm in his quad wheelchair!

Melvin’s a three-legged pig with a big personality! He’s never let his missing limb slow him down!

Did we answer all your questions on "Turkey On wheels"? 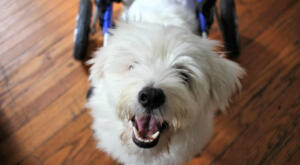