A throwaway of a dog, and a pit bull at that. So begins the life of Ruby, who turned out to be just that: a gem.

Abandoned in an empty house at around six months old, the sickly pit bull was rescued by St. Francis of Assisi Rescue and spent three weeks in an animal hospital. That’s when Pat and Lynn Bettendorf got the call asking them to foster the pup. It was Thanksgiving weekend. They already had five dogs and a houseful of family and friends on the way. They said “no” – twice. The third time the rescue called, they said “yes.” That “yes” not only changed the puppy’s life, it changed theirs – and a whole lot of other lives as well. 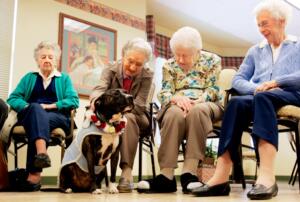 Fully aware of the breed’s innate strength and reputation, the Bettendorf’s are responsible pet owners who train their dogs well. Pat immediately recognized Ruby’s particularly gentle nature and went the extra mile to provide Ruby with a year of specialized training so that she could become a certified therapy dog, and later, a certified assistance dog.

She would go on to visit with and comfort elderly people in nursing homes, patients in hospitals, and elementary schools, shattering unjustified stereotypes of her breed wherever she went: 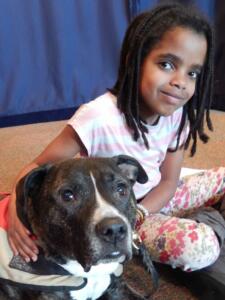 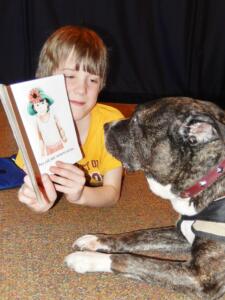 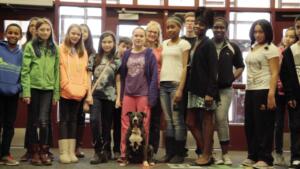 As if that wasn’t enough, Ruby also took the spotlight in live theater, playing the family dog in Cheaper by the Dozen, and a key role in the production Of Mice and Men.

Apparently loving the limelight, she also took second place in a nationwide Milk-Bone contest, which earned her a place on the famous dog treat box, as well as several media appearances.

s been pack leader, as her calm, unflappable nature made her a natural leader with her canine family members.

It’s a good thing she had things under control at the family home so that everything ran smoothly when the Bettendorf’s adopted a beautiful daughter from China, who joined the family at age two.

Maybe it was love at first sight, but Ruby and Sadie have been inseparable for the eight years since: 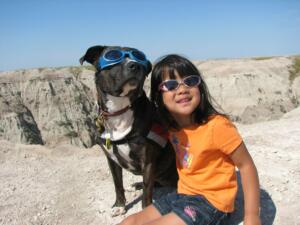 Ruby then served as inspiration for Pat to take up the pen. She stars in two wonderfully entertaining and engaging books:
Ruby’s Tale and Ruby’s Road.

Pat and Ruby have traversed many roads on the way to various book signings. Ruby sits – or more often, lies down or snoozes – on a table next to Pat during the signings. She is ever gentle, ever the poster child for rescues and pit bulls. 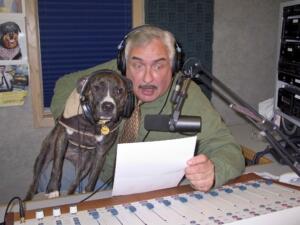 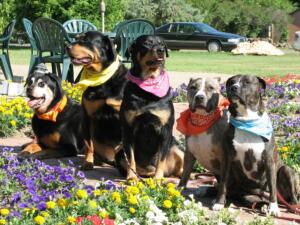 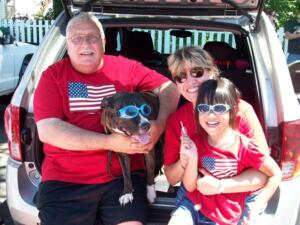 Life has had its ups and downs for Ruby, just like for most everyone on the planet. Ruby underwent cancer surgery in 2009, which she pulled out of well with quality care. But Cushing’s Disease took its toll on the beloved pet, requiring some assistance for her hind legs, which she gets from a dog wheelchair. When Ruby got her Walkin’ Wheels dog wheelchair in the spring of 2016, Pat said,

“I still just can’t get over the dramatic – astounding – change in her life, especially her mental health. From depression to a vital, engaged member of the family again. Not to mention getting out and exploring the world., meeting and greeting people. To have a second chance at life!”

Ruby is now visiting people and doing her therapy work on wheels, inspiring people in yet another way with her courageous spirit and sweet outlook on life. Her ability to open people’s hearts and minds seems to have no bounds. 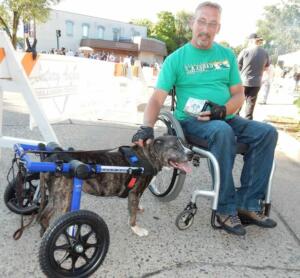 One life. A dog’s life – a dog that was left to die in an abandoned house. She spreads love and good will, helps to educate and inspire, and comforts the sick and lonely. All this would have all been lost to the world had she not been rescued – and then cared for so lovingly by the Bettendorf family.

May Ruby’s life continue to sparkle for many more years to come. 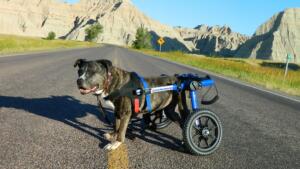 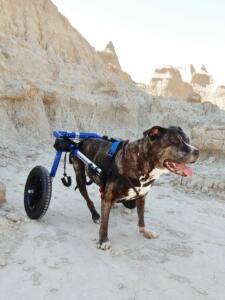 For more information and photos about Ruby’s amazing life, visit:
www.facebook.com/pat.rubystale  or http://www.rubystales.com/

Did we answer all your questions on "Rescued pit bull"?

How to Help a Pig with Mobility Issues