Tivi, a Pitbull/Sharpei mix, was known for his fighting spirit, strength, and determination. It takes a special dog to overcome all of life’s obstacles, and against all odds, that’s precisely what Tivi did. 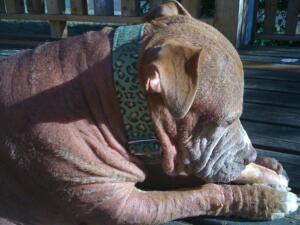 In 2006, Tivi was found abandoned on the side of a reservoir in Central Oregon. He was found hogtied; his muzzle was bound. Someone had covered him in gasoline, set him on fire, threw him from a moving vehicle, and left him for dead. On impact, he had broken his hip and dislocated his shoulder. He was in such bad shape that his rescuers could not identify his breed or color. Over 90% of his body was burnt, and he spent weeks recovering in intensive care. When his surgeons determined he was healthy enough to leave the hospital, he was brought to the Humane Society of Ochocos, a no-kill shelter where he could live and continue the healing process.

His caregivers at the Humane Society saw there was something special about Tivoli right away. “The first few months, he showed no emotion and was very quiet,” says Speck. “You could see it in his eyes. He was almost human, only better.” Suffering from anxiety and still reeling from his experiences, adjusting to his new life was complicated. He was unsure of the other dogs and did not know how to interact, and it took him over a year before he willingly stepped outside. The transition was slow, but Tivi began to open up and became more comfortable at the shelter. The real challenge was ahead, finding him his forever home.

After two years in the shelter, they knew it was time. The Humane Society asks for the local news to share Tivi’s story. His story airs with little response, but his caregivers refuse to give up.  They know that Tivi’s family is out there; they asked the news to air the story again. This time it works! Hundreds of miles away, Jonathan Elwing fell in love with Tivi and knew she was his dog. The first thing the next day, he makes the long journey to the Humane Society of Ochocos to bring him home.

“Tivi was our goofball, a champion snuggler, a therapy dog to my ailing parents, a buddy for our other dog, Emma, and just about the best dog you could ever ask for.” 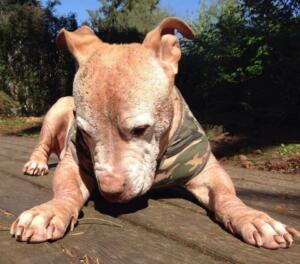 Tragedy struck again in 2016.  Tivi suffered a severe stroke and was discovered collapsed on the ground. His stroke left him with limited mobility in all four of his legs. Already struggling with painful arthritis, Tivi was completely immobilized. Moving around on his own was impossible, and he became completely dependent on his family’s assistance, needing to be carried everywhere. Once again, Tivi’s strong will to survive kicked in. “He could have called it quits right then. But he had a spirit that wouldn’t quit!”. Somehow, Tivi would get back on his feet and walk again.

Inspired by his strength and perseverance, Tivi’s family was willing to do whatever it took to help him.  With the help of his doctors and physical therapists, they devised a plan. They would try a full-support dog wheelchair that would allow him to regain his independence and strengthen his weakened muscles. After months of hard work with his physical therapist and continuous use of his 4-wheel wheelchair, a miracle happened. Tivi began walking on his own!

“We were blessed to have so many wonderful walks in the forest with him before he decided to finally retire to heaven. Our home hasn’t been the same without him, but we still can’t believe how lucky we were that God felt we deserved this magnificent, special dog.”

Although Tivi has passed, he is certainly not forgotten. He left a significant legacy behind, loved deeply, and never gave up.

Watch the video below to see more of Tivi’s amazing journey:

Did we answer all your questions on "rescue dog"?