Thank you to author Sandy Johnson for this guest blog post.

The Pet Healer Project: Stories of the healing bond between humans and animals will bring you into a world of healing possibilities for your pets. Accordingly, I am grateful to Walkin’ Pets by HandicappedPets.com for sponsoring this important project.

Leopards and Lions and Snakes – Oh, My!

I had just published my second novel and was thinking about what I wanted to do next. I was living in New Mexico at the time, teaching at the Indian School and visiting Indian reservations on weekends. Moreover, I loved the ceremonies and the reverence shown to the elders, especially the shamans.

Shamans were more than spiritual leaders, they were healers, advisors; holy men and women who provided teachings and counsel. Those experiences led to THE BOOK OF ELDERS: The Life Stories and Wisdom of Great American Indians. On to Tibetans and others around the world, resulting in more research and more books. Until one day I stumbled onto animal healers.

My beloved Charley, a Brussels Griffon, was my guide. Her series of health problems that conventional veterinarians could not seem to resolve led me deeper into the world of alternative possibilities.

The Extraordinary World of Pet Healing 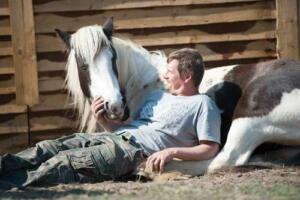 What I found astounded me — men and women from all backgrounds, highly accomplished in their fields, who had also found their way into this extraordinary world of healing. Some lived in the U.S., others in the U.K., Canada, and South Africa. Each had their unique stories of love and dedication and a heightened sense of connection to the animal world.

Not just cats and dogs, but bats, iguanas, mountain lions, owls. All species of life on this planet were their personal laboratories and clinics. Hence, an injured animal or bird lying on the road, or a friend’s pet brought in desperation, were all welcomed and treated. 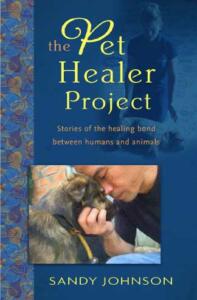 Meeting and writing about these amazing people forever changed the way I think about our pets and how we relate to them. Specifically, those known to be animal communicators teach that we are communicating our thoughts and feelings to our pets all the time. And they in turn are responding — all the time.

Our unconscious anger or impatience does not go unnoticed or unfelt; they take it in, and it affects their behavior and their health. Similarly, our love and affection, our calm soothing voice and tender eye contact heals as surely as the Reiki healers I interviewed.

I have a new puppy now, Maddie. She’s six months old and I observe daily, minute to minute the effect our silent communication has on us both. House-training was a breeze while other issues were not.

But the awareness of my thoughts and emotions and the lasting impact they have in all aspects of my life, has been truly transformative. I invite you to examine your own gift of healing.

Meanwhile, here is a peek into The Pet Healer Project:

The world of healers has always fascinated me. Knowing that just outside the borders of our perceived reality is a whole other universe of mystery and magic and unlimited possibilities has always called to me.

A few years ago, when I was researching one of my books on healers, I attended a conference at UCLA. Scientists and doctors shared the stage with energy healers to discuss the differences in their approaches to health and healing. The issue on that day was the placebo effect. Placebo, from the Latin I shall please, points to the brain’s role in medical treatment; whether it’s the doctor the patient wants to please or the patient’s belief system the doctor wants to reinforce or the medicine itself. Sugar pill or protocol, the placebo response has played an important role in medicine for more than 200 years.

One of the speakers, an oncologist, told the well-documented story of “Mr. Wright,” a cancer patient suffering from late-stage lymphatic cancer. Wright made a practice of reading medical journals; one day he read that a certain horse serum was shown in clinical trials to be effective on cancer. Begging and pleading, he got the doctor to include him in the trial. Within weeks, Wright’s tumors began to melt away and he was feeling great. Ten days later, Wright was discharged from his “death bed.” A few months later, a story appeared in the medical journal stating that recent studies proved the serum to be totally ineffective. Almost immediately Wright had a relapse, the tumors returned, and in a matter of months he was dead.

I was particularly moved by this story. I had always wondered about the placebo effect even while writing about the many successes of various healers. In 1996, when I interviewed the Dalai Lama for The Book of Tibetan Elders, I put the question to him. “Yes,” he answered, “the placebo is the mind’s own physician.”

Next, a veterinarian from Germany presented slides showing X-rays of a nine-month-old puppy that had been hit by a car. The dog’s hind leg was badly broken, the tibia and fibula (shin bones) were completely separated from the femur (thigh bone). The vet informed the devastated family that this kind of break would never heal; if they wanted to save the puppy’s life the leg would have to be amputated. As it happened, the puppy’s owner was a healer. Refusing to accept either option, the family took the puppy home. Immediately the healer began Reiki treatments, a form of energy healing developed in 1922 by a Japanese Buddhist.

The vet presented the next series of slides. One week later, the puppy’s leg was beginning to knit. The next slide, an X-ray taken one month later, showed that the bones had healed completely! Pointing to the last slide on the screen she said, “Here is a photo of the puppy running and playing. Of course, this puppy had no belief or non-belief in the healer’s ability to heal, entirely ruling out the question of the placebo effect.”

Remove the placebo effect and what we’re left with is the very existence of energy healing itself. The proof it seems is in the puppy.

There must be more people who specialize in working with animals, I thought. Calling on my network from my previous books on healers, I packed my virtual bag and laptop and took off, hopscotching (electronically) across the country and even across the pond to England to find them. And since my travels were virtual, Charley (my nine-year-old Brussels Griffon) could remain firmly planted on my lap. I followed wherever the trail led me and along the way, I met the most extraordinarily gifted, highly educated, and accomplished people whose lives are dedicated to the health and well-being of our four-legged companions. Not the garden-variety psychic healers popular among today’s New Agers, many of these pioneers in the field of complementary health hold advanced degrees in various sciences. Their love and compassion for animals inspires in each of us a more profound sense of humanity.

These everyday angels walk among us, hardly noticeable except when they’re harnessing their power and directing it onto some ailing or injured four-legged or winged or crawling creature. I came across some demons, too, that made me want to look away, but then I came across an undercover angel whose heroic rescues got my attention.

The Pet Healer Project is a collection of their amazing and often miraculous stories.

Want to read more? Go to this page to purchase a copy of  The Pet Healer Project.

Congratulations to author Sandy Johnson for winning the Silver Medal IPPY Award in the Animals/Pets category and for receiving several other awards! 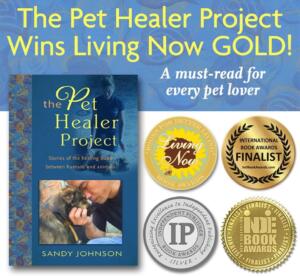 Did we answer all your questions on "pet healer project"?

Tips for How to Calm Your Dog in the Car

Pressure Sores & Your Pet: How to Treat Decubitus Ulcers in Dogs