Omid the Miracle Dog is a true rags to riches story, which has touched a lot of people. Gaining the attention of the 2019 Hero Dog Awards. This prestigious award is an annual celebration for dogs and their owner. The Hero Dog Award is one of the highest honors a dog can receive. 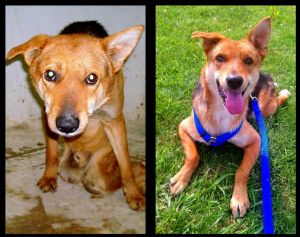 Before Omid found his forever home in the United States, he was a stray living on the streets of Iran. Living on his own and forced to fend for himself, Omid encountered one danger after another. Hit by a car, Omid was left paralyzed and could only get around by dragging himself through the streets. He struggled for years without receiving any kindness or help and experiencing only misfortune and pain. On one particularly horrific day, Omid was tied by his tail to the end of a motorcycle and dragged for miles. One of his ears had been cut off, he was missing toes, and he suffered knife wounds.

Even with this inhumane treatment the young pup lay injured. Bystanders watched him struggle in pain and yet no one took action or offered any help. Even the Iranian government failed Omid. Government Officials regularly take to the streets and shoot unsuspecting street dogs. Killing most dogs and in some cases burying the wounded alive. With the odds stacked against him, it is truly a miracle that he survived.

One snowy day everything changed. After years of wandering the streets, Omid meets someone who changes his life forever. A kind man saw him and went out of his way to help the injured dog. And he was brought to the vet where he finally received the medical care he so desperately needed. He was in such terrible condition the Veterinarians were shocked he had survived. Omid had beat all the odds and survived horrific circumstances. Suffering from a terrible infection and too many wounds to count they believed it would be a kindness to put him down. But when the man looked at Omid all he saw was strength and a will to survive. His savior refused to give up on him. He was going to save this poor dog and find him a home to call his own.

Omid was brought to the Vafa Animal Shelter where he could heal. The shelter’s mission became finding him a forever home in the U.S. Choosing to call him “Omid,” which means “to have hope.” And they found Omid the perfect forever home with Bany Alavi. 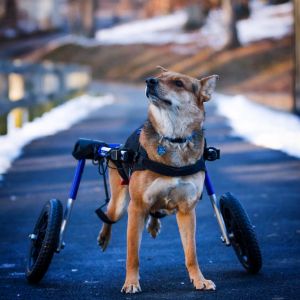 Once Bany and Omid found each other, Bany knew her life had been changed forever. Omid slowly learned to trust people and most importantly how to enjoy life. Bany wanted Omid to have every opportunity to live his best life and knew that to do that she needed to get him back on his feet.  With the help of his Walkin’ Wheels dog wheelchair, he regained his mobility and independence. For the first time he was able to move freely and without pain. As Omid adapts to life in the U.S., his story begins to spread. Quickly becoming an overnight sensation. Appearing on the cover of Nova Dog Magazine, featured on TV, in a film festival, and inspired the book “Miracle Dogs: Adventures on Wheels” by Sandy Johnson. Everyone knew who he was and strangers recognized him on the streets. Making friends everywhere he goes and changing lives. 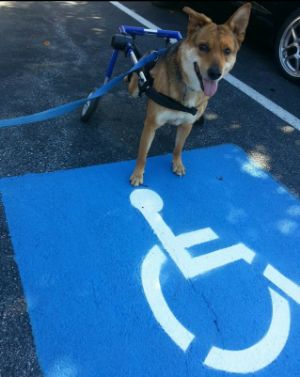 Omid has touched so many lives, but one stands out beyond all the rest. A chance encounter with a young wheelchair bound boy, may have actually saved a life. Bany received a letter from the mother of the little boy with an amazing story. Battling depression, the young boy was lonely. His struggles were overwhelming and had lost his will to live.

Meeting Omid changed everything. Upon hearing his incredible story of survival, the boy’s whole perspective and outlook on life changed. He realized his life had purpose, and neither his wheelchair nor his disabilities defined him. He learned that he mattered, and he had the ability to impact others. Maybe he too could change someone’s life. Omid gave him hope, and a purpose.

Being nominated for the prestigious Hero Dog Awards is an incredible opportunity for Omid. If named the 2019 Hero Dog, Omid hopes to use his platform to impact more people like that little boy. Bany hopes that together, she and Omid can raise awareness about the importance of adopting handicapped animals,

“I want people to know that there ARE alternatives to euthanasia. It doesn’t have to be the end of the road. These voiceless animals WANT to live. I often hear how lucky he is. But I’m the lucky one. Omid saved me. I am, forever, indebted to him. I will spend all the days of my life, sharing his story and the importance of rescuing disabled dogs. For it’s the ‘broken’ ones that know how to heal your mind, body, heart and soul. Believe me, I am the lucky one. ”

Visit here to show your support and vote for Omid. Winners are determined based on the number of votes they receive, so vote often! You can show your support by voting daily. You have from now through May 2nd to cast your vote! If selected Omid and the other finalists will be flown to Hollywood for the star-studded awards gala.

Did we answer all your questions on "Miracle dog"?