Walkin’ Pets saw an inspiring video of a dog named Riley on social media and reached out to his owner for his story. Riley’s mom (Kelsey Freeman) wrote the following post about her dog’s journey from injury to recovery . . .

We adopted Riley as a puppy for $10 from a kill shelter in Tennessee back in 2011. My husband and I would agree that it’s the best $10 we ever spent.

Riley’s always embraced being a farm dog. He’s very energetic, loving, and above all, fearless. (Unless he thinks he’s seen a snake. And who doesn’t get a little freaked out by a garden hose every now and again!)

We’ve joked about how he’s more cat like than dog due to his nine lives. He’s been in multiple tussles with ground hogs, chased by cattle, and leapt out of a moving truck bed more than a few times. Each time he’s narrowly escaped serious harm, until last May (2016), when Riley was hit by a pick-up truck near our house.

We should do for a week and had almost lost hope when a little miracle happened. He was wagging his tail.

The vet took X-rays and determined that his left back leg had popped out of the socket. He set the leg and put Riley in a sling.

Per his usual self, Riley could not be kept down. As a result, his leg popped back out of place, and we started to notice that he had stopped using his other leg.

Our vet was straightforward; Riley might not ever regain use of his legs again.

We had prayed about what Giving Him a Chance

It was at that moment when we decided to try out a wheelchair before making any hasty decisions. If Riley could regain his quality of life and be a happy boy, we would certainly try.

I ordered a wheelchair, and the moment we put him in, he knew just what to do!

He was putting so many miles on his wheelchair that I had to buy him a more durable one that he could really run off road in. You just can’t take the farm dog out of him.

Riley eventually started moving his legs while they were in the harness, and slowly we let him try placing his feet as he walked in his chair. Moving his legs became intentional placement, and that became out-of-the-chair standing.

With each month, we saw such improvement that could only be explained by Riley’s strong will to move again.

Now one year later, Riley is walking all by himself without his chair. He’s even running!

Riley has always had my heart. He’s been a source of hope and inspiration to me and many others.

Riley is a happy, silly boy who continues to make us laugh and even cry, watching him continue to make gains in his healing process.

We believe that his wheelchair was a source of therapy for Riley, and through the consistent use of it, he’s made a huge recovery.

Thank you so much Walkin’ Pets for the life you’ve given back to our buddy and the joy you have brought to our lives!

Walkin’ Pets thanks Kelsey for her wonderful story, photos, and video!

Did we answer all your questions on "dog wheelchair benefits"? 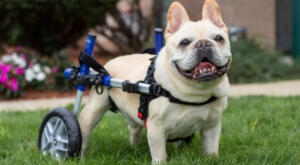 How to Help a Dog That Can’t Walk 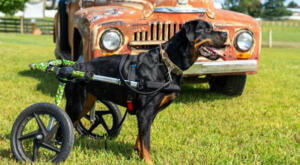