Michael Malaro, founder of Flying Mutts Rescue, helps dogs in high-kill shelters in the southeastern states to escape death by flying them — for free — to rescues up north. Rescues in the northeastern states have a higher success rate of adoption, so by flying them to these rescues, Mike is giving them a chance at life.

The Flying Mutts Rescue was founded in 2016 out of a desire to give dogs in high-kill shelters a decent chance to survive and be adopted. Shelter staff identify the dogs that are most vulnerable, which often includes elderly dogs who are traditionally harder to adopt.

Mike flies down to pick up dogs and brings them up north to whatever rescues have already agreed to accept them. He often works with Pilot.dog, a rescue in North Carolina, that helps coordinate efforts.

“I’m just trying to reduce the number of animals in some of these kill shelters in the southeast.”

Mike flies a small, single engine plane. There are four seats in total; two up front and two right behind them, with a very small space behind the second row for baggage.

The dogs generally step on the airplane’s wing, and then walk into the plane from there. Mike tries not to crate them so that they have the freedom to move and look out the window!

Mike usually flies with a volunteer, Karen, who sits next to him. She gives water to the dogs and pets and comforts them.

The dogs can’t jump into the front seats, because the minimal height of plane prevents that. If they’re small enough, they sit on Mike’s lap!

“The dogs are within a foot of us at all times. They usually lay down behind me. Once I start the engine, I think it calms them down. A lot of them are asleep before I even take off. I look back and they’re passed out in the back seat as we’re rolling down the runway.”

Using Talents to Make a Difference

In the course of a year or so, Mike has flown 62 dogs! That is 62 lucky dogs who have escaped death row through Mike’s incredible generosity and skills, as well as through the others who are associated with Flying Mutts Rescue.

Mike keeps in touch with most of the rescues. His walls are covered with photos of “happy endings” of the dogs he has flown and are now living in their forever homes.

You can hear Mike talking about his work, the Flying Mutts Rescue, and touching dog stories on the “Adopting a Dog” episode of the “Happy, Healthy Pets” radio podcast. 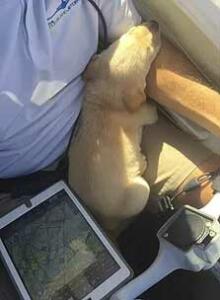 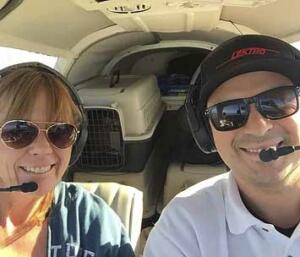 Did we answer all your questions on "Rescue Dogs"?