Acclaimed dog behaviorist Cesar Millan filmed a TV show episode with Kathrin Maghen and her Chihuahua/Manchester Terrier mix Jax, who uses a dog wheelchair. The show will air in early 2017.

Jax’s hind legs were left paralyzed.  He is regaining muscle with the help of hydrotherapy and acupuncture.

Jax is also getting lots of attention when he’s out on the town, not only because he’s so adorable, but because he gets around in a Walkin’ Wheels dog wheelchair.

It’s the attention he’s gotten from people who gravitate toward the little guy when he’s out in public that brought him to Cesar Millan.

“Everybody wants to say ‘hi’ to him in the wheelchair; it’s caused him to start barking at people,” Kathrin says.

She appealed to Cesar for advice on how to best approach this situation. We’ll have to watch the show, which will air in February or March of 2017, to find out what Cesar had to say! Here’s a sneak preview of the film shoot on video: 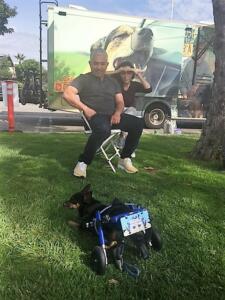 “Cesar says that it is our job to make heaven on earth for our furry friends, and by training the owners, we are getting one step closer to that goal. Cesar will make an appeal on behalf of differently-abled dogs to tell people it’s okay to adopt them.”

Jax is a great canine ambassador. He shows the world that life is still to be enjoyed, despite a bump in the road.

“He’s happy – he inspires everyone. I want to bring that to people.”

Kathrin didn’t want Jax’s injury to go in vain. To that end, Jax is being turned into a “super hero.” Kathrin is developing a brand called “Wheel Power.” The brand will feature animated animals that have turned their “disabilities” into superpower abilities. Profits from merchandising will be directed to a nonprofit to fund emergency-based surgeries for pet owners who cannot afford them.

In addition to Kathrin’s human family, Jax is now sharing the family home with a 14-year-old foster dog. That’s love – the greatest superpower of all!

Did we answer all your questions on "Cesar Millan"?