A Puppy for Life 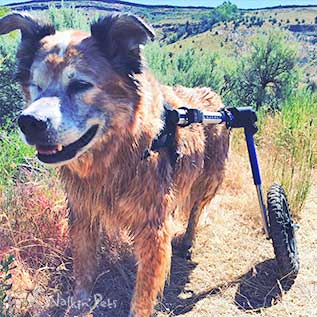 My name is Nick Breninger, and I rescued Wrigley back in 2007 (man, time flies!). I guess that would make him a hair over 10 years young. He is an Australian Shepherd/Red Heeler Mix. He truly is my best friend. He comes everywhere with me — and I’m running over the mountain and through the woods any chance I can get!

Wrigley has always suffered from a cataract induced blindness in his left eye. This developed into Glaucoma, and I made the decision to have the eye removed earlier this year, as it was causing unnecessary pain without functionality. Additionally, about a month ago he ran into a marshy area after a stick and let out a yelp. He hobbled back over on three legs, and I knew something was up. His stubbornness has always hidden any pain, so anything he shows definitely worries me. The local veterinarian suspected an ACL tear on his rear right leg after a consultation. The next step would be an MRI.

A couple of weeks later, a squirrel chirped just right in the backyard on a warm day, and Wrigley couldn’t resist laying claim to the yard. Who uses stairs when they’re in a hurry? Leaping off the deck, he inadvertently injured his rear left leg. He has had a rough year. At this point Wrigley was immobile. Carrying him out to use the bathroom, up and down steps, and into the car has become part of my daily routine. With his independent nature, I think he really struggles with having to rely on someone to help him with something that has come so easily for him in the past. Wrigley became fairly down in the dumps and began refusing to eat his food, where typically he would forget to chew he’s so hungry. It was tough to see.

My girlfriend purchased a Walkin’ Wheels dog wheelchair because she could see how Wrigley was struggling, as well as how I was struggling not being able to do much for him. She did some research and chose Walkin’ Wheels due to the design (we are both engineers). I was skeptical, as I didn’t think Wrigley would ever use it.

After a few walks, he was a pro, and I could see his attitude changing. Long story short, despite his injured legs, he is Wrigley again; a puppy for life. The Walkin’ Wheels has even enabled me to continue to bring Wrigley on the many adventures I find myself on. I can’t imagine not having him by my side, and truly for him, as well as myself, it has been a great help.