A Dog with Spina Bifida

The Life of Riley

I met Riley on December 19, 1999 when I met a woman with a box of puppies. She was angrily trying to clean up a puppy the size of a beany baby because he had pooped all over himself. Riley made eye contact with me and talked to me continually as I held him. I took him home, cleaned him up and showed him his new forever home. I put him in my coat pocket and my nephew and I walked down the street looking at Christmas lights. All was good in our world. 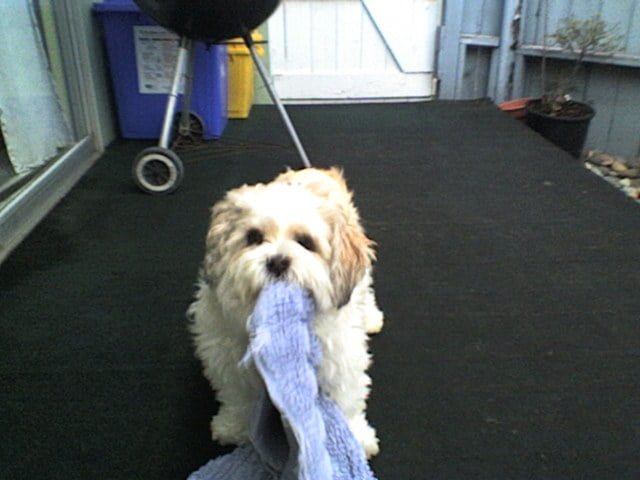 Children called him the Easter puppy because he hopped and left little brown egg shaped bowel movements behind him.

I learned Riley didn’t know how to eat or walk. He quickly learned to eat but never tried to walk. He would lie on a blanket on the living room floor all day, little stuffed beany baby dogs around him, and watch the world go by. I took him to a vet highly regarded by the state veterinary board to find out what was wrong with him. The diagnosis was that he was perfect in every way, just slow to thrive.

He developed the strength to stand, his back legs wobbly and strangely bent. Gradually he began the process of moving away from the blanket, his back legs stretched out too far to really get anywhere. He learned that hopping worked. Children called him the Easter puppy because he hopped and left little brown egg shaped bowel movements behind him. I made more vet visits, called the state to verify the vet’s credentials and worried. A stranger in Petsmart told me to take him to a vet in a nearby town. At this point I’d try anything. The diagnosis was that Riley was born with a condition similar to Spina Bifida. He would never walk like other dogs, never have control of his bladder or bowels. She told me she had seen similar dogs and the owners had all chosen to put the dogs to sleep.

At seven months old, Riley’s life was just beginning. I made the decision to keep this special little dog. There have been health scares and huge vet bills along the way, but Riley is family and he has taught me to value the minutes instead of the days, the journey instead of the destination. He plays with other pets and enjoys life to the fullest. He brings smiles to those who see him on our travels. He is a blessing in every way. Finding the Handicapped Pets website was an answer to my prayers. Thanks for all you do to make the world a better place.

Riley passed away on May 26, 2010, from an unrelated condition.  He lived to be 11 years and 7 months, and most of that time was as a happy boy.  He was loved more than anyone can ever imagine.  He was the best friend and child I could ever have been blessed with and I thank God that he gave my little Riley to me.

Some exclusions apply. Free shipping on orders over $49 will be automatically applied at checkout for delivery within the continental US only. International shipping rates and shipping to Alaska, Hawaii, and Puerto Rico will be calculated based on order’s size, weight, and final destination. Oversized and drop ship products such as: Pet Steps, Pet Ramps, and Heavy-Duty Support Harnesses are not included.